Why A Prominent Saudi Cleric Frowns Upon Cat Selfies 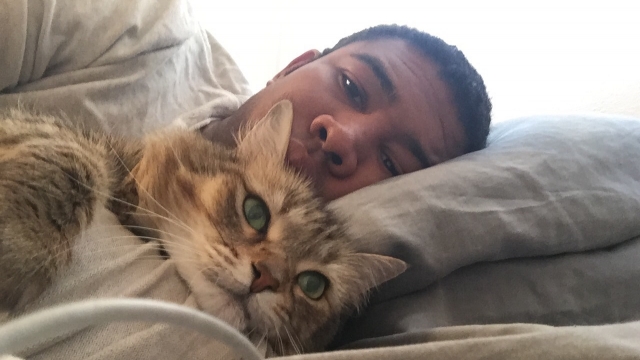 SMS
Why A Prominent Saudi Cleric Frowns Upon Cat Selfies
By Grant Suneson
By Grant Suneson
May 26, 2016
A top Muslim cleric in Saudi Arabia said during a television appearance that selfies with cats and dogs are frivolous and should be prohibited.
SHOW TRANSCRIPT

It turns out one of the internet's favorite pastimes is frowned upon in Saudi Arabia.

Prominent Muslim cleric Saleh Al-Fawzan was asked about the "new trend" of posting photos with cats. He wasn't happy about the fad, but it has nothing to do with the cats.

Al-Fawzan said, "Taking pictures is prohibited if not for a necessity — not with cats, not with dogs, not with wolves, not with anything."

That's got to be disappointing news for Saudi internet users, though discouraging selfies with wolves is probably sound advice.

The Washington Post reported that there are some highly conservative Islamic scholars who think that pictures or videos go against rules that forbid anyone to depict human or animal images. But Al-Fawzan offered his opinion during a recorded television appearance, so it seems like that rule isn't really enforced all that much.

In fact, Saudi Arabia has its own press agency that runs photos, and the top religious leader of the country seems to have no problem being photographed.

But selfies have been a contentious issue in the country for a few years. There was an intense online debate in 2014 about whether people should be allowed to take selfies during their pilgrimage to Mecca, which is considered the holiest place in the world to Muslims.

The opposition to photographs isn't a widely held view in the Islamic faith, and plenty of Saudis ignore the rules as well because we all know how addicting it is to get likes on Twitter.

This video includes a clip from Memri TV and images from Getty Images.