Why A BBC Reporter's Blue Whale Sighting Was So Rare 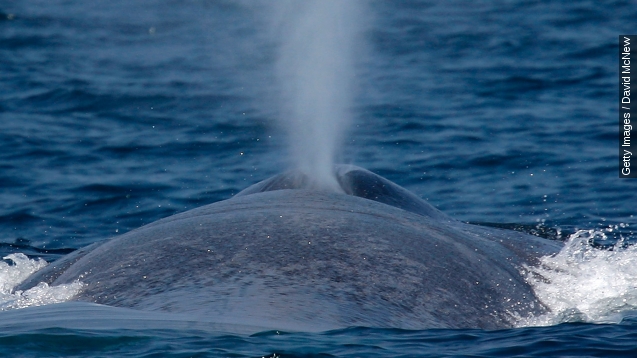 SMS
Why A BBC Reporter's Blue Whale Sighting Was So Rare
By Lexie Hammesfahr
By Lexie Hammesfahr
September 1, 2015
One BBC reporter lost his composure during a live interview when he learned a rare blue whale, the world's biggest animal, was lurking near his boat.
SHOW TRANSCRIPT

You know that feeling when you see something shocking mid-conversation and totally lose your cool? Well that's what this BBC reporter did when he saw a blue whale during a live TV interview.

"Oh, stop. I'm so sorry. I've just heard — this is incredible — I've heard word that we have on our helicopter a blue whale," BBC reporter Steve Backshall said.

If you're unfamiliar with whales, you might be thinking, "OK, but people see whales all the time." And that's true, but this is a blue whale, which is the largest animal to ever live on Earth. (Video via National Geographic)

Blue whales can grow up to 100 feet long and weigh about 200 tons — that makes them bigger than dinosaurs.

Although these whales can be found in every ocean on Earth, the International Union for Conservation of Nature lists the species as endangered, with only 10,000-25,000 left in the wild.

The endangered species label is a result of whale-hunting during the late 19th and early 20th centuries. In the 1960s, blue whales were given international protection, and hunting the species was outlawed. (Video via Barcroft TV)

"This is one of the most extraordinary things I've ever seen. ... Some of these blue whales have been the size of jet planes without its wings," Backshall says.

Even though hunting them is illegal, ecological changes still threaten the species. Changing habitats, acidification of the ocean and other factors are making the whales' main food source, krill, harder to find.