Who Wins When You Tweet Pizza Orders: Brands Or Consumers? 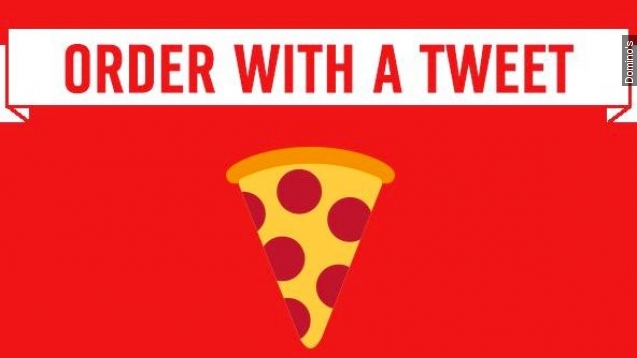 SMS
Who Wins When You Tweet Pizza Orders: Brands Or Consumers?
By Katherine Biek
By Katherine Biek
May 20, 2015
Starting Wednesday, Domino's will allow customers to place orders on Twitter. Is this just the beginning of ordering via social media?
SHOW TRANSCRIPT

Is Twitter going to be the wave of the future when it comes to ordering things online?

If Domino's has anything to say about it, then yes.

"Because we're more than pizza."

OK, maybe that was a little dramatic. But what could possibly require more of a flashy opening than Domino's confirming it's going to start letting customers order via Twitter?

You don't even need to include your address! Just, you know, make sure you set up their pizza profile on Domino's website otherwise it won't know where to send your food.

"It's the epitome of convenience. We've got this down to a five-second exchange," Domino's CEO told USA Today.

But Domino's isn't the only company that's allowed its customers to order via Twitter.

Some have tried limited-time promotions, like Starbucks. Back in 2013, the coffee giant let customers put #TweetACoffee along with a friend's name in a tweet; Starbucks then sent that friend a $5 gift card.

And the Miami Dolphins tried a Tweet-A-Beer campaign during their last few games this past season, which allowed spectators to tweet what beer they wanted and their seat number to an app powered by Anheuser-Busch.

Other companies, like Old Navy, AMC Theaters and Burberry, have taken advantage of Twitter's Buy button, which allows users to purchase items right from the social media site.

It's a pretty smart move, if you think about it.

There are 500 million tweets sent every day from 302 million monthly users. That's a lot of potential customers with money to spend. Cha ching. (Video via Twitter)