Who Will Lead The DNC? 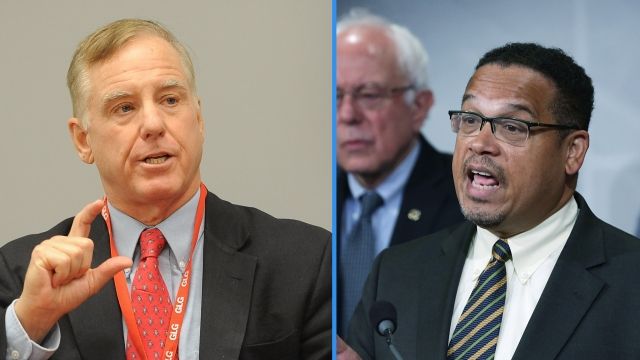 SMS
Who Will Lead The DNC?
By Matt Picht
By Matt Picht
November 11, 2016
Rep. Keith Ellison and Howard Dean are the front-runners to take over for Donna Brazile.
SHOW TRANSCRIPT

The Democratic Party has a lot of rebuilding ahead after Tuesday's unexpected loss. Step one is finding a new chair for the Democratic National Committee.

Previous Chair Debbie Wasserman Schultz resigned after leaked emails from the DNC revealed the organization's attempt to undercut Sen. Bernie Sanders' presidential campaign. And the current interim chair, Donna Brazile, is dogged by her own email problems after emails hacked from Clinton campaign chair John Podesta's inbox suggested she fed the Democratic nominee questions ahead of some CNN debates.

It's a critical role: The DNC head will help direct fundraising and strategizing for the party over the next few years. Since they don't have much control in federal and state governments, Democrats will need to rely on a strong DNC to contest elections.

One of the current front-runners for the job is Rep. Keith Ellison, a progressive from Minnesota who was an early backer of Sanders' presidential campaign.

Ellison is viewed by progressives as the party's best chance to shift focus from wealthy donors to grass-roots activism. He says he wants to eschew the high-tech campaign models of Hillary Clinton's campaign for initiatives focused on building personal relationships.

Ellison hasn't formally announced his bid, but he's already got the backing of Sen. Chuck Schumer, incoming Senate minority leader and one of the most powerful Democrats left in Washington, D.C.

Progressives like Sanders and Sen. Elizabeth Warren have also voiced support for Ellison.

But he has competition.

Howard Dean told MSNBC: "I like Keith Ellison a lot; he's a very good guy. There's one problem: You cannot do this job and sit in a political office at the same time."

SEE MORE: These Are The Most Interesting People We Met At The DNC

Dean focused on empowering Democrats in all 50 states during his tenure as chair, and he left the job with the party in control of the House, Senate and White House. But his criticism of Sanders during the primary could damage his support with the party's progressive wing.