Who Will Be America's Next First Spouse In The White House? 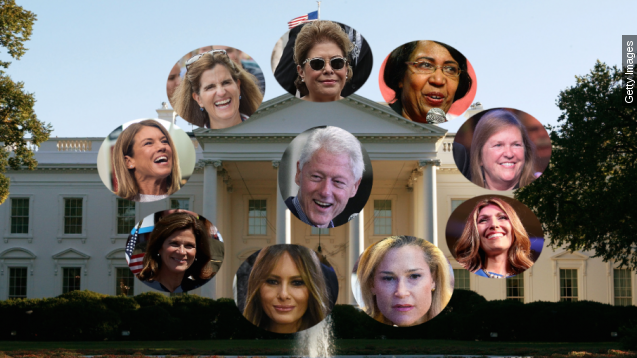 SMS
Who Will Be America's Next First Spouse In The White House?
By Eugene Daniels
By Eugene Daniels
January 16, 2016
Next January, we'll have a new president — and a new first spouse. Here are 10 people who might accompany the commander in chief.
SHOW TRANSCRIPT

We've spent months talking about our next possible president, but what about the person who will join the likes of Eleanor Roosevelt, Jackie Kennedy and Michelle Obama as the next significant other of our country? In no particular order, here are 10 of our possible first spouses. (Video via Franklin D. Roosevelt Presidential Library & Museum,John F. Kennedy Presidential Library,The White House)

First up: Karen Kasich. Mrs. Kasich was born and bred in Ohio and graduated from Ohio State University with a degree in communications. She spent almost two decades in public relations and marketing but left the workforce to concentrate on raising her family. She's a known advocate of good diet and exercise. (Video via WEWS, Kasich for America)

Next on the list is Mary Pat Christie. Mrs. Christie was born in Pennsylvania and has a master's degree in business administration and finance from Seton Hall. She's been really successful in the finance world but stepped down from her most recent job to help out on the campaign trail. (Video via Office of Gov. Chris Christie, Fox News)

Columba Bush was born in Mexico but became an American citizen in 1979. During her time as Florida's first lady, Mrs. Bush focused her attention on promoting the arts, fighting addiction and substance abuse, and raising awareness about domestic violence. (Video via Jeb 2016)

Next up is Lacena "Candy" Carson. Mrs. Carson was born in Detroit and has a really impressive resume. She triple-majored at a little school named Yale and went on to earn her master's in business administration at Johns Hopkins. She's co-authored three books with her husband in addition to her own autobiography. Oh, and she's a former concert violinist. (Video via Fox News)

Now to Jeanette Rubio, who was born in Florida to Colombian immigrants. She works for Kristi's House, an organization that helps youth who have been abused or involved in human trafficking. She's a former Miami Dolphins cheerleader and was featured in the organization's very first swimsuit calendar. (Video via NBC)

Heidi Cruz was born in California and spent some of her childhood going with her parents to Africa on missionary trips. Mrs. Cruz got her MBA from Harvard Business School and worked for the George W. Bush administration on economic policy and national security. In '05, she left D.C. to work for Goldman Sachs but has taken a leave of absence to work on her husband's campaign. (Video via Fox Business, C-SPAN)

Melania Trump was born in Slovenia and began a modeling career at age 16. She holds a degree from a university in Slovenia in design and architecture and speaks five languages, including French, Serbian and German. She has her own line of jewelry and timepieces as well as a skin care collection. (Video via ABC, QVC)

Next is Katie O'Malley, who has a law degree from the University of Baltimore. Mrs. O'Malley is a former prosecutor and currently a district court judge in Baltimore. While juggling her judicial duties and being Maryland's first lady, she became an advocate for domestic violence victims internationally.

The last possible first lady on our list, Jane Sanders, grew up in Brooklyn and has a Ph.D. Mrs. Sanders is a former college provost and president. She's never shied away from her husband's political life, either; she's worked as a spokeswoman, policy adviser and chief of staff. (Video via CNN, Bloomberg)

And last, the man who could be our first, first gentleman? First man? First dude? Well, either way, do you really need to know more about him? If so, blame your high school history teacher. (Video via C-SPAN)