Who Was The Wealthy Woman Buried Near King Richard III? 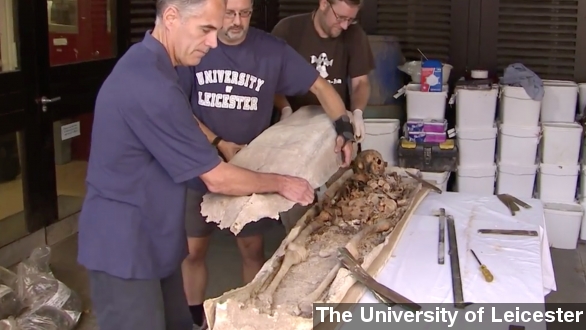 Now we've moved on to more interesting and mysterious things like the wealthy woman's coffin inside of a coffin near where Richard III was buried. We don't know who she is, how she died or if she had a connection to the king. (Video via The University of Leicester)

And we all love a good mystery, right? Researchers found a stone coffin inside a lead casket. And since the woman was buried in a rather elaborate way, and also in a prominent position, she was probably pretty important.

"This coffin's actually right in front of the high order, and so it's probably a very high-status burial," The University of Leicester's Richard Buckley told CNN.

The woman was over 60 years old when she died, and an examination of her bones revealed she had a good diet, never suffering from malnutrition.

And the fact it is a woman adds another element. Before, outlets were predicting the very intact stone coffin could belong to a knight or one of the friars themselves.

But nope — woman. A woman who couldn't have been a knight or a friar because these were considered male roles in medieval times.

So far, Richard III is the only male skeleton that has been excavated, but the archaeologist who led the dig said there's the potential of finding hundreds more burials.