Who Was Behind The White House Hack? 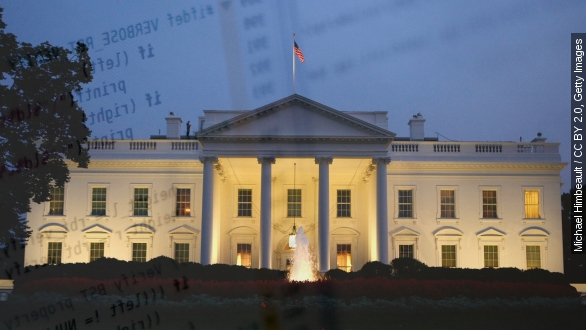 When The New York Times broke the news that a major hack of White House servers in October gave hackers access to the president's unclassified emails, outlets described the culprits one way. (Video via The White House)

Fox News, CBC and the BBC's anchors used the term, "Russian Hackers," and a CNN anchor said, "Russian hackers got a hold of President Obama's emails."

That's probably because that's what The Times reported: The hackers, "are presumed to be linked to the Russian government, if not working for it."

That little bit of information isn't attributed directly to The Times' source, so it's difficult to tell where that information is coming from. And hackers can be notoriously hard to track, but there are signs that lend weight to the claim.

While Russian hackers have targeted the private sector in the past — stealing passwords and robbing banks, among other things — there's also a precedent of hackers being paid off by Russian intelligence. (Video via Fox News)

Hackers coordinated a massive cyberattack against Estonia during a political dispute with Russia over a Soviet war memorial back in 2007. (Video via RT)

More recently, Russian hacking groups have been connected to cyberattacks on NATO, the Ukrainian government, and German government websites ahead of a meeting between Chancellor Angela Merkel and Ukraine's prime minister. (Video via CBS, Arirang)

Because all of those attacks were more about politics and not money, it's not unreasonable to tie the hackers to the Russian government.

Still, public officials have largely toed around the issue, although that might be changing after a hack on unclassified Pentagon servers was tied to — you guessed it — Russian hackers. (Video via PBS)

"Adversaries should know that our preference for deterrence and our defensive posture don't diminish our willingness to use cyber-options if necessary," Carter said.