Who Stands To Benefit From The Boko Haram-ISIS Alliance? 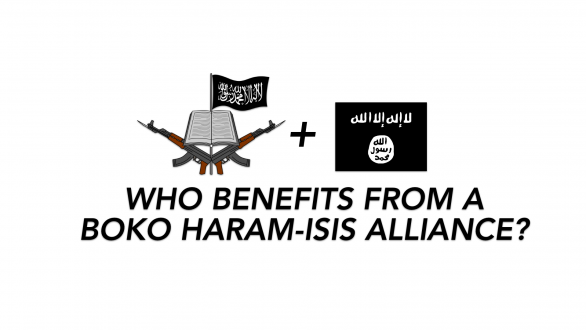 SMS
Who Stands To Benefit From The Boko Haram-ISIS Alliance?
By Jake Godin
By Jake Godin
March 13, 2015
Boko Haram and ISIS have announced an alliance, but what does either militant group stand to gain from such a deal, and will it make them stronger?
SHOW TRANSCRIPT

The message, recorded by ISIS spokesman Abu Muhammad al-Adnani, also urges those who can't make it to the Middle East to travel to West Africa to fight instead.

The message also included the usual ISIS propaganda lines such as threatening to "blow up" the White House or taking over capital cities in Western nations. But how much does the meat of the message — that ISIS and Boko Haram are teaming up — actually change things?

While the idea of an interconnected expanse of land between ISIS in the Middle East and Boko Haram in West Africa might seem fearsome at first, CNN's global affairs analyst Bobby Ghosh says there's still just too much distance between the two to make it effective.

"But they are separated by a continent; it's not like they are going to be able to trade fighters or weapons ... maybe a little money, but not much beyond that."

Still, in an interview with Voice of America, Nigeria's President Goodluck Jonathan claims Boko Haram is already sending fighters to the Middle East to train at ISIS camps before coming back to fight in Nigeria.

"Some of the Boko Haram members go to have their training at the ISIS camp and come back."

So if not fighters or weapons, then what could Boko Haram get out of the allegiance? Legitimacy.

Writing for Quartz, Hilary Matfess of Johns Hopkins University says that, by partnering with ISIS and its self-established "caliphate," Boko Haram will become more appealing toward potential recruits.

And writing for CNN, J. Peter Pham of the Atlantic Council's Africa Center says joining with ISIS will allow Boko Haram to commit even more gruesome tactics, similar to what ISIS does within its own territory.

So far, it seems like Boko Haram is the primary beneficiary of an alliance here. But ISIS does get something — publicity.

That, according to Dr. Afzal Ashraf of the Royal United Services Institute, is a valuable commodity. The counterterrorism expert tells NBC it'll sustain ISIS' image of an ever-expanding "Islamic Caliphate."

And that's something they'll need. The Iraqi government is nearing a victory in pushing ISIS out of the town of Tikrit in Iraq while Kurds have been making advances on ISIS territory ever since they pushed the group out of Kobani earlier this year.