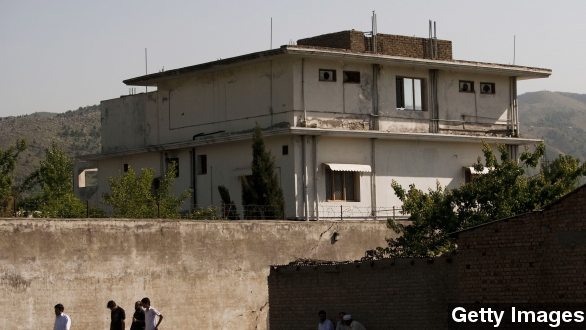 Who killed Osama bin Laden? The question at the heart of the 2011 raid on bin Laden's compound in Pakistan just got an answer Thursday, when a former Navy SEAL stepped forward to claim responsibility for the lethal bullet.

Robert O'Neill, a former member of SEAL Team 6, was one of the three U.S. soldiers in the room when bin Laden was fatally shot. He says his shot was the one that killed bin Laden. (Video via NBC)

O'Neill's identity was first made public by the military blog SOFREP in protest of his decision to come forward next week in an interview with The Washington Post and Fox News.

"The man who shot Osama bin Laden is a Fox News exclusive. ... For those who are treating it as breaking news, we hope you enjoy the program."

O'Neill, who's now a public speaker, told The Washington Post he decided to break his silence because his identity had already been leaked. "What once was a closely guarded secret had spread widely through military circles ... and was known by members of Congress and at least two news organizations."

But O'Neill's account of the fatal moment clashes with that of another former member of the team: Matt Bissonnette, whose controversial 2012 book "No Easy Day" detailed bin Laden's death as well.

O'Neill and Bissonette agree that three SEALs fired shots at bin Laden, but Bissonette claims the team's point man killed bin Laden. O'Neill maintains that shot missed, and that his was the lethal blow. (Video via Al Jazeera)

And both men are being censured for speaking out by the Navy leadership, which penned a stern open letter last week denouncing "willful or selfish disregard for our core values in return for public notoriety and financial gain."

A former SEAL told CNN all of the disclosures about the raid have roiled the usually tight-knit SEAL community.

JONATHAN GILLIAM ON CNN: "It's a brotherhood, and it is a tight group that is very professional and they take their job very seriously. And this is not a good light to be shown on us."

O'Neill first gave his account of the raid in a 2013 interview to Esquire.