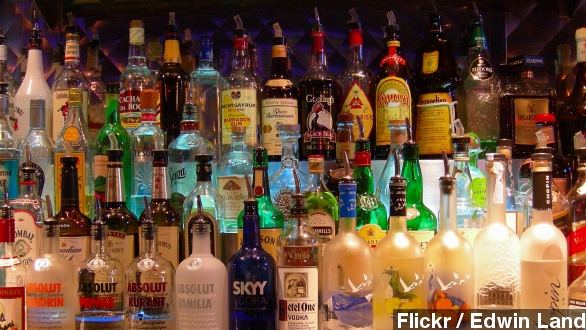 SMS
WHO Report: Alcohol Kills 1 Person Every 10 Seconds
By Matt Moreno
By Matt Moreno
May 12, 2014
A new report from the World Health Organization estimates about three million people die every year in an alcohol-related incident.
SHOW TRANSCRIPT

It's a pretty staggering statistic, but according to the World Health Organization, it's true. One person dies every ten seconds due to alcohol.

"The World Health Organisation says alcohol abuse kills more than three million people every year and it's called on governments to do more to reduce harmful drinking." (Via BBC)

"That's more than AIDS, tuberculosis and violence combined. So this includes drunk driving, alcohol induced violence and all the diseases and disorders associated with alcohol." (Via KTTV)

Released Monday, the report says alcohol contributes to about 7.6 percent of all men's deaths and 4 percent of women's deaths. There's also evidence alcohol use among women might be increasing. (Via Flickr / Edwin Land)

The report also found about 16 percent of people partake in heavy episodic drinking — better known as binge drinking. (Via Flickr / B Duss)

There's actually not much good news in the report. WHO sent it out in hopes of drawing the attention of governments worldwide to help combat this issue.

Norman Giesbrecht from Canada's Centre for Addiction and Mental Health spoke with CTV and called the report very important and timely.

"Often it's considered to be sort of a minor problem and there's lots of jokes about drunkenness and about heavy drinking and I think we need to be much closer attention to alcohol and the damage it does."

Heavy alcohol consumption can result in a variety of different medical conditions including liver, neurological and cardiovascular disease. (Via WebMD)