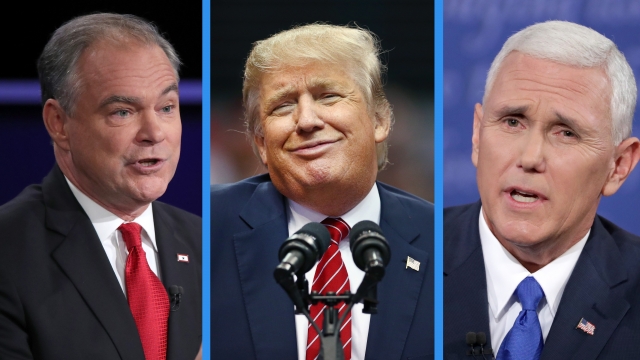 In the vice presidential debate, Gov. Mike Pence denied a lot of Sen. Tim Kaine's claims — despite the evidence.

Kaine said, "We don't think that women should be punished, as Donald Trump said they should, for making the decision to have an abortion."

Pence replied, "Donald Trump and I would never support legislation that punished women who made the heartbreaking choice to end a pregnancy."

SEE MORE: This Debate Was Basically Just Pence And Kaine Talking Over Each Other

But Donald Trump previously told MSNBC's Chris Matthews, "There has to be some form of punishment."

Matthews asked, "For the woman?"

Trump said, "Yeah, there has to be some form."

"Let's start with not praising Vladimir Putin as a great leader. ... Donald Trump and Mike Pence have said he's a great leader," Kaine said at the debate.

But Trump once told MSNBC: "He's running his country, and at least he's a leader. You know, unlike what we have in this country."

"They want to go house to house, school to school, business to business, and kick out 16 million people. And I cannot believe ... " Kaine said.

"How are you going to pay for this? Are they going to be ripped out of their homes?" MSNBC host Mika Brzezinski asked.

Trump replied: "They're going back where they came. If they came from a certain country, they're going to be brought back to that country."

Pence also accused the Clinton-Kaine ticket of basing their campaign on insults — that one might actually be pretty accurate.