WHO Declares India Free Of Polio 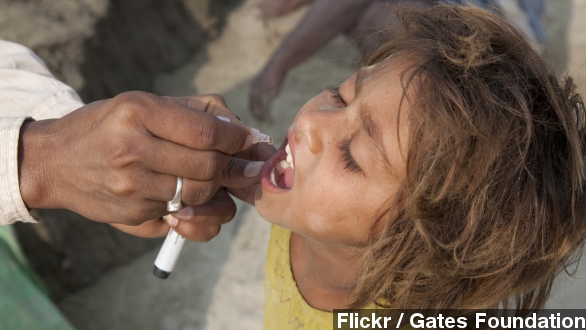 The World Health Organization has declared India free of polio after three years of no new cases — meaning 80 percent of the world is now free of the virus.

According to BBC, many experts thought India would be the last of the polio-affected regions to completely eradicate the disease because of the country's large population and widespread unsanitary conditions.

Polio is an infectious disease that causes paralysis in a matter of hours. It is transmitted through contaminated water or food and mainly affects children younger than 5 years old. It cannot be cured, only prevented. (Via CNN)

To prevent the disease from spreading, a campaign to vaccinate Indian children began in 1995. The Wall Street Journal reports by 2009, the number of polio cases in the country had fallen significantly but still made up half of the world's total polio cases.

By 2012, the World Health Organization no longer classified India as a country where polio was endemic. But the process wasn't easy.

As part of immunization efforts, the Indian government organized two days a year to administer polio vaccines to as many as 170 million children each day. Health workers also commuted to houses, making sure children had received the vaccine. (Via BBC)

Although prevalence of polio has dropped 99 percent since 1988, the fight against the virus is ongoing. According to CNN, the disease is still endemic in Pakistan, Nigeria and Afghanistan.

And in December, the World Health Organization began immunization efforts in the Middle East following an outbreak in Syria, reportedly due to war and violence in the area preventing children from getting access to health care. (Via Euronews)

CBS reports in Pakistan, Islamic militants often attack health workers and vaccination efforts are seen as a ploy to spy on Muslims.

As part of a plan to completely eradicate polio globally by 2018, the World Health Organization urges countries to start phasing out the current oral polio vaccine, which contains the live virus, and introduce an injectable vaccine with the inactivated virus by 2015.