White Spot Mystery On Ceres Will Hopefully Be Solved Soon 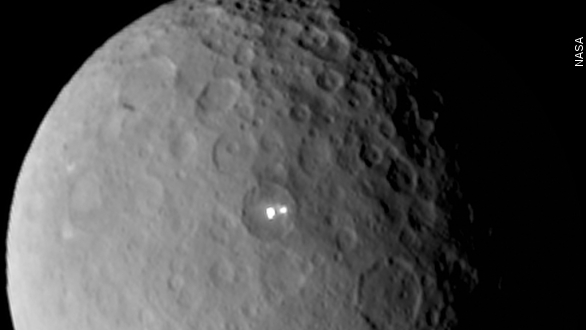 SMS
White Spot Mystery On Ceres Will Hopefully Be Solved Soon
By Steven Sparkman
By Steven Sparkman
May 12, 2015
The decade-old mystery of what's causing the dwarf planet Ceres to have shiny white spots will likely be solved as the Dawn probe moves closer.
SHOW TRANSCRIPT

Scientists are getting tantalizingly close to solving a modern space mystery: What are those spots on the dwarf planet Ceres?

The first white spot showed up in images from the Hubble Space Telescope in 2003 and 2004, but NASA's Dawn spacecraft has been giving us better and better looks over the past few months.

Dawn sent back images of Ceres as it approached the dwarf planet, eventually entering orbit in early March. The latest images were taken earlier this month and show the weird shiny areas in unprecedented detail.

So, what are they? Now, it should surprise no one that a decade-old anomaly on a nearby dwarf planet could lead to some pretty wild theories.

The idea that it might be a sign of alien life is actually one of the less out-there ones. Some scientists think icy objects like Ceres could potentially have been the birthplace of life in our solar system.

But Twitter users seem to like the idea that the largest spot is an actual alien city. The Dawn mission's director even teased the theory, saying: "That’s ridiculous! ... Do they even have cities? For all we know, [Cereans] may live only in rural communities." Yep, that's a NASA joke.

Without a firm answer, it's possible to believe the spots are just about anything.

Although they're probably ice. Ice or salt, maybe shiny rocks. Reality can be such a buzzkill sometimes.

The Dawn spacecraft is set to get an even closer look at Ceres in June and will send back more pictures at least twice before then.