'White Lives Matter' Will Be Labeled A Hate Group 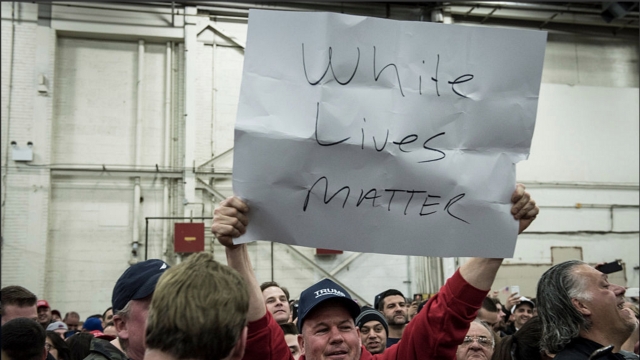 SMS
'White Lives Matter' Will Be Labeled A Hate Group
By Ryan Biek
By Ryan Biek
August 29, 2016
The Southern Poverty Law Center announced it will be adding the group to what it calls its "Hate Map."
SHOW TRANSCRIPT

White Lives Matter will be added to a list of hate groups.

The Southern Poverty Law Center announced it will be adding the group to what it calls its "Hate Map."

An SPLC spokeswoman told Vice: "We are listing them because they are clearly white supremacists. Their motto should be 'only white lives matter.'"

The group got a lot of attention earlier in August when it sent armed protesters to an NAACP office in Houston. Several members were carrying assault rifles, while others waved Confederate flags.

The Anti-Defamation League has argued that symbols worn by those White Lives Matter protesters came from the Aryan Renaissance Society.

In July, the National Socialist Movement announced a White Lives Matter rally in Buffalo, New York, but it was dwarfed by hundreds of counterprotesters.

The SPLC has also argued that many of the social media campaign leaders for White Lives Matter have also been members of the Aryan Renaissance Society.

Some have argued Black Lives Matter is actually a hate group as well.

To that, the president of the SPLC has said: "There's no doubt that some protesters who claim the mantle of Black Lives Matter have said offensive things, like the chant 'pigs in a blanket, fry 'em like bacon' that was heard at one rally. But before we condemn the entire movement for the words of a few, we should ask ourselves whether we would also condemn the entire Republican Party for the racist words of its presumptive nominee."

White Lives Matter will eventually go on the SPLC's list of hate groups, but according to the Houston Chronicle, the Hate Map in question won't be updated until February.