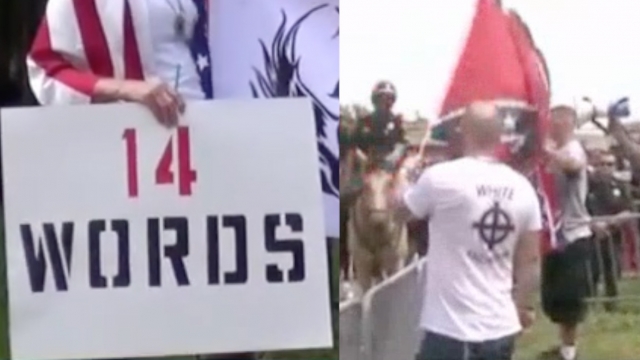 By Lauren Stephenson
August 22, 2016
The organizer of Sunday's protest outside an NAACP office said the group is not racist, but their clothing and signs may send a different message.
SHOW TRANSCRIPT

These are White Lives Matter protesters demonstrating outside the Houston NAACP office on Sunday. One of the organizers said the movement is trying to celebrate heritage and culture, but some protesters' clothing and signs could tell a different story.

Video from local outlet KPRC appears to show a white supremacist version of the Celtic cross. And this video from KIAH shows a sign that seems to refer to the 14-word white supremacist slogan, "We must secure the existence of our people and a future for white children."

About 20 members of the movement said they were protesting what they believe to be the NAACP's inaction regarding violence against police officers and destruction of property.

"It claims to be one of the largest civil rights organizations in the United States and one of the oldest, and we feel that it is failing in its job in speaking out against the atrocities that have been happening in this country lately — the attacks on white officers," White Lives Matter movement organizer Ken Reed told KRIV ahead of the protest.

But one of the White Lives Matter protesters said that's not the case.

"We expect every race to be proud of who they are, and we're just out there fighting for our rights just like everybody should," Reed told KRIV.

"It's a physical manifestation of white supremacy, white privilege and racism being protected by this country," one counter-protester told KPRC.

Police officers on horseback showed up to make sure the protests stayed peaceful.