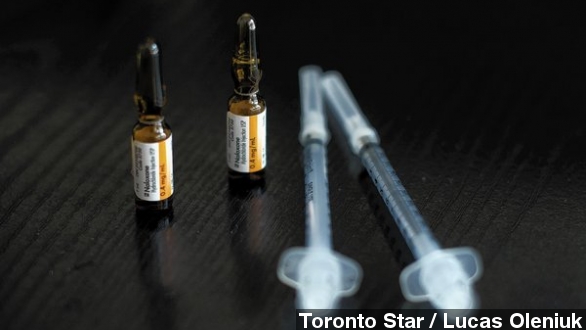 Deaths from OD'ing on prescription painkillers have jumped almost 20 percent since 2006.

And the Obama administration says this could help: the overdose-reversal drug naloxone. (Via Wikimedia Commons / Ben Mills)

The news comes from a report from the Office of National Drug Control Policy that says prescription drug abuse is a bigger problem in the U.S. than heroin use, which came back into the spotlight following the death of Philip Seymour Hoffman. (Via The White House)

According to the White House, the problem centers around opioids. That includes heroin and severe painkilling drugs — like OxyContin, Percocet and morphine — that have effects similar to heroin. (Via ABC)

But Dr. Wilson Compton, the deputy director of the National Institute on Drug Abuse, told NBC heroin is cheaper than prescription drugs. That, coupled with increased restrictions on prescription drugs, make opioids a gateway to heroin, according to Compton.

Because of those numbers, Bloomberg reports The White House is urging increased access to naloxone, "an emergency overdose treatment injected or delivered through a nasal spray." That spray "counteracts the life-threatening depression of the central nervous system and respiratory system that leads to death."

​Some critics have suggested access to an OD reversal drug might encourage heroin addicts to continue to use. But proponents say naloxone saves lives. A Los Angeles Times writer cites an 80-90 percent success rate.

Lawmakers have been adopting legislation expanding access to the drug. Not only that, he adds, but many states "...have passed so-called good Samaritan laws that would offer some immunity to drug users who call 911 during an overdose."

According to The White House, ​17 states and Washington, D.C. have amended their laws to increase access to naloxone.