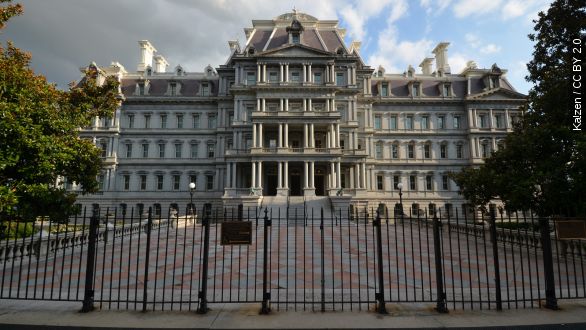 "Condemn the persecution of women, or religious minorities, or people who are lesbian, gay, bisexual or transgender," President Obama said.

Keeping with a major theme of his presidency, the Obama administration has installed a gender-neutral bathroom on White House grounds.

Now, to put this in perspective, the Eisenhower building has just over 500 rooms on five floors, so one gender-neutral bathroom is not exactly practical.

But White House spokesman Jeff Tiller tells Politico it's more of a symbolic gesture anyway: "The White House allows staff and guests to use restrooms consistent with their gender identity, which is in keeping with the administration’s existing legal guidance on this issue."

"We're on the right side of history! I'm going to sign this executive order. Thank you, everybody." President Obama said.

This new restroom could be seen as the White House trying to lead by example. Wednesday, President Obama's executive order on LGBT Workplace Discrimination went into effect, and things like gender-neutral restrooms are definitely something LGBTQ activists would like to see more of.

And while the White House complex is installing an all-gender restroom, many states around the country are looking to ban them. The Kentucky senate recently passed a bill banning students from using any restroom that didn't match the gender on their birth certificate.

Advocates for these bills say they're meant to protect against sexual predators, but activists call such measures discrimination against the LGBTQ community.

This video includes an image from Getty Images and OZinOH / CC BY NC 2.0.