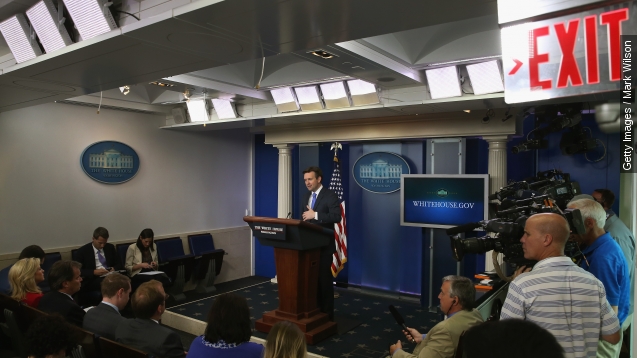 White House reporters are a naturally inquisitive group, so after the press briefing room was briefly evacuated Tuesday, plenty of them were asking: "What was that all about?"

The Secret Service said a bomb threat had been called in which mentioned the briefing room specifically, so it was evacuated to allow for a search. (Video via C-SPAN)

Sounds pretty straightforward. But, at least from the press's perspectives, a few things about it just didn't add up.

First, reporters seemed surprised when they learned that White House staff hadn't been evacuated and President Obama hadn't even been moved.

"It looks like, as far as I can tell right now, all I can see being evacuated are reporters," ABC's Jonathan Karl said.

"Check out the map here. You can see how close the briefing room is to the Oval Office," Fox News' Shepard Smith said.

ABC's Jonathan Karl pointed out that White House staff had been moved to the press secretary's office, "steps from the briefing room."

Second, and this one irked a lot of reporters, the cameras, many of which had been left on during the evacuation, were covered up or obscured by White House staffers.

"Earnest could also not account for who went through the briefing room while it was cleared out and pointed our cameras at the ceiling," Fox News's James Rosen said.

"Which is odd. I've never seen that happen either," Jake Tapper said. ...

"I don't find that really surprising, but it's weird," Kosinski said.

There was also a general feeling that the Secret Service's actions didn't make a whole lot of sense. In the video, you can see that reporters didn't get into much of a hurry, and the officers didn't make much of an effort to move them along. (Video via C-SPAN)

But a former Secret Service agent told CNN, for the evacuation to have happened at all, there had to have been a pretty big risk.

"It doesn't look good to evacuate the press room. ... To get to that decision ... probably required the input of someone at the upper executive level of the Secret Service, which says to me that it was a very serious and credible threat," Dan Bongino said.

Press Secretary Josh Earnest was unable to answer most of the reporters' questions Tuesday, saying they would be better addressed to the Secret Service, which so far hasn't said much.