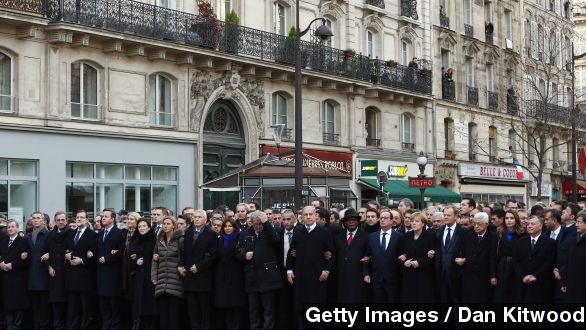 Over 40 world leaders linked arms in Paris this weekend to denounce terrorism and rally for freedom of expression. Take a close look at the pictures from Sunday and you'll spot one notable absence.

"They have said schedules just didn't permit, but other world leaders found time in their schedule to show up," MSNBC reporter Jane Timm said.

And by the looks of it, U.S. leaders seemed to have room in their schedules. The president was in Washington and Vice President Biden in Delaware.

The White House is brushing off the criticism, stressing the U.S. has been supporting its oldest ally in other ways from the get-go.

President Obama did make a point to sign a condolence book at the French embassy with the words "Vive la France." (Video via The White House)

Actually traveling to Paris and attending the rally would have involved a major security effort that, as National Journal's Ron Fournier writes, would have been a distraction — "a direct counter to the vibe that organizers achieved in the streets of Paris."

And it's not like the U.S. didn't send a representative to the march. U.S. ambassador to France Jane Hartley was there. (Video via France 3)

But not her boss. Secretary of State John Kerry later called the criticism over his absence "quibbling" and pointed out he had different engagements, including a visit to India. (Video via U.S. Department of State)

But that wasn't enough for some critics who pointed out security and schedule concerns didn't keep other world leaders from showing up Sunday. (Video via RT)

Taking a lot of flak is Attorney General Eric Holder, who was already in Paris that morning and was expected to attend the rally. (Video via U.S. Department of Justice)

On Monday, Kerry arrived in Pakistan for an unannounced counterterrorism visit and said he'll travel to France this week. The White House also said it would host an anti-extremism conference next month.