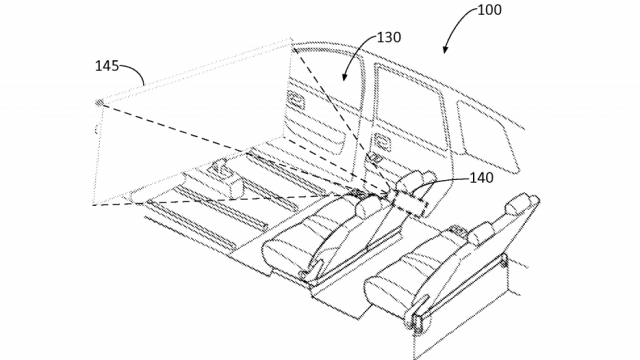 If we're going to have autonomous cars someday, we're obviously going to need a way to watch movies or TV shows while the car does the driving.

Ford nabbed a patent March 1 describing one way screens in self-driving cars could work, but it doesn't seem like the best way to get the job done.

The patent describes an entertainment system with a screen that drops down from the ceiling in the front of the vehicle and a projector that may also be mounted to drop from the car's ceiling. So it's like a drive-in movie for the interior of the car.

Putting aside that this might give passengers motion sickness, or just make them generally uncomfortable — because the projector screen would block a view of the road — haven't we come up with better ways to make this happen by now?

The answer is yes. And some competing car companies have already thought about how to include movie-friendly screens in vehicles.

Like the Mercedes-Benz autonomous concept car: It has side-panel screens that passengers can interact with much like a smartphone's touch screen.

Tesla has also included a huge center console touchscreen in its cars. Right now, Tesla recommends you not stare at it for too long, since you have to drive the car. If the car is driving itself, though, that screen could presumably be tweaked to easily play movies at an enjoyable size.

There are also devices like Navdy that turn cars' windshields into head-up displays to keep drivers' eyes on the road. And Navdy actually works like Ford's newly patented idea, but instead of needing a separate screen, the display is projected onto a car's windshield.

The point is, there's still time before manufacturers really need to start nailing down this technology. So please, automakers, take your time and get this right. And maybe don't knock autonomous technology back to the 1950s by making the cars house drive-in theaters.