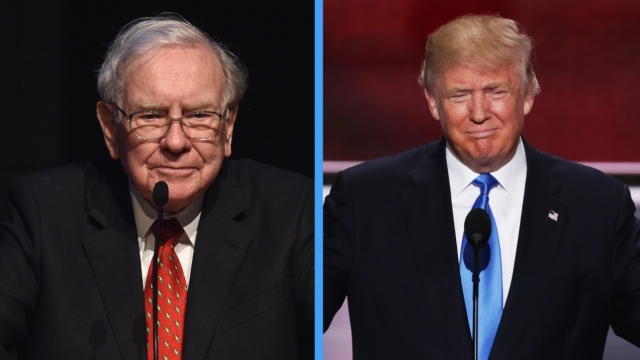 SMS
Where Trump Got Challenged Matters As Much As Who Challenged Him
By Ryan Biek
By Ryan Biek
August 2, 2016
Billionaire investor Warren Buffett rallied for Hillary Clinton in his home state of Nebraska and challenged Donald Trump to show his tax returns.
SHOW TRANSCRIPT

"You will learn a whole lot more about Donald Trump if he produces his income tax return. And so, that's why I'd like to make him an offer," Warren Buffett said.

Billionaire investor Warren Buffett challenged the Republican presidential candidate on Monday to show the public his tax return, saying he'd do the same.

Trump is the first presidential candidate not to release his tax returns since 1973. One of the reasons he's given is because he's under audit.

"And I'll release them when the audit is completed. Nobody would release when it's under audit," Trump said less than a week before Buffett's challenge.

But Politico notes there are no rules against doing that; Richard Nixon released his during an audit.

And Buffett told the crowd at a Hillary Clinton rally in Omaha that he, too, is currently being audited but hinted he has nothing to hide.

Buffett is by no means the first billionaire to try to sway the public against Trump. Michael Bloomberg and Mark Cuban endorsed Clinton less than a week before Buffett's challenge.

But it's the rally in Omaha itself that may be of special significance. Nebraska strongly leans Republican, but it's one of only two states that hands out electoral votes by district.

That means Clinton could lose the state as a whole but still steal a point if she gets the majority of votes in the Omaha district.

The only other state with that system? Maine –– which Trump is set to visit Thursday. The Wall Street Journal notes Trump may be trying to steal a point in Maine's predominantly rural second congressional district.