Where Menendez Stands In The History Of Senate Indictments 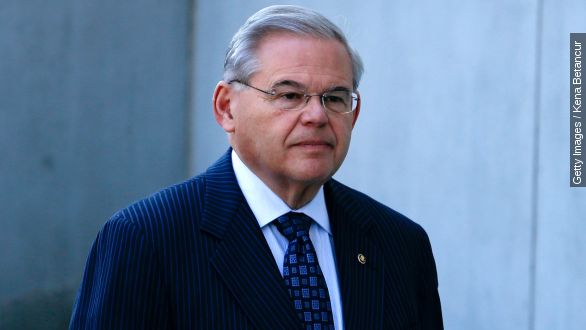 New Jersey Democrat Robert Menendez, recently indicted on corruption charges, is hardly the first U.S. senator to be in that position. (Video via Office of Sen. Robert Menendez)

In all, 12 have been indicted while in office. Here's a look at a few of those cases.

The Alaska Republican was one of the country's longest-serving senators.

In 2008, he was found guilty of accepting hundreds of thousands of dollars in home renovations and then lied about it on Senate ethics forms.

The case was later thrown out but only after Stevens had lost his re-election bid.

"I look only forward and I still see the day when I can remove the cloud that currently surrounds me," Stevens said during his last speech on the Senate floor. (Video via C-SPAN)

"I'm going to vigorously challenge all the charges. I will win in the end," Hutchison said during a press conference.

Shortly after she took office in 1993, Republican Sen. Kay Bailey Hutchison was indicted on felony charges of official misconduct. (Video via C-SPAN)

She was accused of ordering employees to tamper with government records during her time as Texas state treasurer.

She denied any wrongdoing and maintained the charges were politically motivated.

"People see this for what it is," Hutchison said. (Video via C-SPAN)

The case was later acquitted, and Hutchison was elected to two more terms. (Video via Office of Sen. Kay Bailey Hutchison)

This next senator was caught up in a federal probe that served as the real-life inspiration for the movie "American Hustle."

"This is Sen. Harrison Williams from New Jersey, a Democrat. These pictures were taken outside his home in Washington."

In early 1980, NBC reported Williams and seven other members of Congress were targets of an FBI sting operation.

A federal jury was shown video of Williams telling an FBI employee posing as an Arab sheik that he could use his Senate position to secure government contracts for a titanium mine. Williams would have benefited because he'd invested in that mine.

In 1981, he was convicted of bribery and conspiracy.

He resigned before the Senate could expel him and ended up serving nearly two years in a federal prison. (Video via U.S. National Archives)

Finally, we'd be remiss if we didn't mention John Smith, who has the distinction of being the only U.S. senator indicted for conspiracy to commit treason.

In 1807, the Ohio lawmaker was accused of involvement in President Aaron Burr's alleged plan to invade Mexico and was nearly thrown out of the Senate for it. Ultimately, the charges were dropped because of a technicality.

As for Menendez, if convicted, he could face up to 15 years in prison for each of his eight bribery counts. The senator denies any wrongdoing.

This video includes images from Getty Images, University of Virginia Law Library, FBI and the Ohio History Connection and music from Skill Borrower / CC BY NC Sampling Plus 1.0.