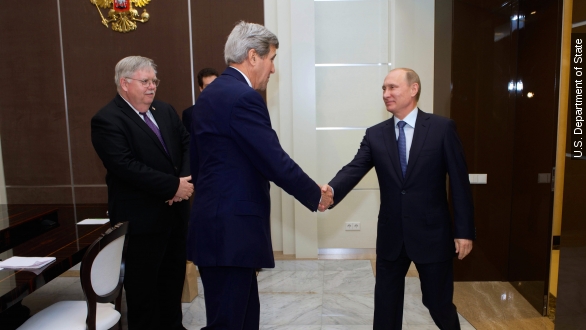 The last time John Kerry met with the Russian president, Vladimir Putin kept him waiting for three hours before showing up. (Video via U.S. Department of State)

And that was before all this went down.

"We are examining a whole series of steps — economic, diplomatic — that will isolate Russia," President Obama said.

So it might come as a surprise that the country that has consistently threatened to isolate Vladimir Putin over his actions in Ukraine is now sending its top diplomat to meet with him. (Video via Kremlin)

But the State Department has downplayed the rift ahead of Secretary Kerry's Tuesday meeting with Putin in Sochi.

"It's not just about Ukraine; it's about Syria, it's about Iran, it's about a number of issues. And just because you strongly disagree with what a country is doing … doesn't mean you shouldn't meet with them. In fact, it actually means you should to try and make progress," State Department spokeswoman Marie Harf said.

It's true the two countries can find common ground on a few issues. Russia is, after all, participating in the Iran nuclear talks, and both countries want to see ISIS defeated.

But there are plenty of issues where they're at odds. Among them, Russia's planned delivery of an air defense system to Iran and Putin's support of Syria's dictator, Bashar al-Assad. (Video via Kremlin)

Oh, and then there's the little issue of Ukraine.

And as recently as Monday, Russia's foreign ministry dismissed the accusations as groundless and blamed the bruised U.S.-Russian relationship on "unfriendly actions by Washington."

This video includes images from the U.S. Department of State.