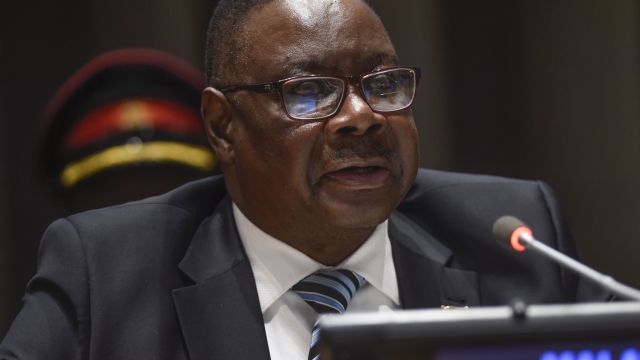 SMS
The People Of Malawi Just Want To Know Where Their President Is
By Lindsay Gloor
By Lindsay Gloor
October 13, 2016
Malawi's president has been MIA since he delivered a speech to the U.N. General Assembly last month, and the people of Malawi are getting worried.
SHOW TRANSCRIPT

The people of Malawi have a question: Where is our president?

He was last seen delivering a speech to the assembly on Sept. 20, calling for international aid to tackle hunger in Malawi.

That's when things got weird. The meeting officially ended Sept. 26, and as of Thursday, Mutharika had not been photographed, interviewed or otherwise seen.

Malawi citizens are frustrated by the lack of communication coming from their government, according to one local news source. This is partially because a Malawian president has disappeared before.

The Malawi Nyasa Times also mentioned that the radio silence is frustrating since federal PR has had no trouble pushing the president's image when it needed something from its citizens.

Mutharika's brother, and former Malawi president, died while receiving medical treatment in South Africa in 2012. There was no formal announcement.

When rumors started swirling that the 76-year-old current president was receiving medical treatment in the U.S., Malawi officials finally released a statement saying he was "enjoying very robust health."

It continued on to say the president would return home on Sunday.

Those spreading rumors about the president's health were threatened with prison time. Mutharika's opponents have openly criticized him for costing taxpayers money they can't afford to lose with his prolonged stay.