When Will The Warriors Lose? 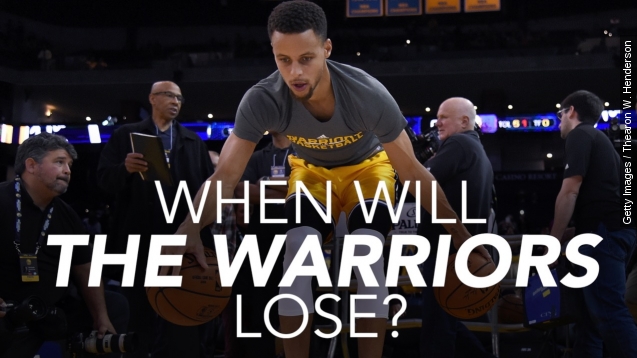 At this point, we're all thinking it: When are the Golden State Warriors going to lose? They've made history by becoming the first NBA team to start 16-0, and there are no signs of them slowing down.

But they've got to lose at some point, right? So when? Let's start with the more plausible predictions, then get increasingly more ridiculous. (Video via KRON)

The Golden State Warriors will lose when ... they play the Indiana Pacers.

And Paul George is back. (Video via Gatorade)

The Warriors could walk into Bankers Life Fieldhouse on Dec. 8, get lit up by the Pacers and leave with their first loss.

This ties into my second prediction: The Warriors could lose some time between Nov. 30 and Dec. 12.

In that span, they'll be on the road for seven straight games. Without a hometown crowd, the Warriors could get fatigued and catch an "L" behind enemy lines.

Let's get to the fun predictions. The Golden State Warriors will lose when ... Steve Kerr returns.

Kerr took a leave of absence because of back issues, ceding responsibility to interim coach Luke Walton. The Warriors got the juice right now, but shifting head coaches could cause a disturbance in the force. Maybe. (Video via KNBR)

The Golden State Warriors will lose when ... the Philadelphia 76ers win.

Philly's finest have been nauseatingly awful to the point that fans created a PSA to save Jahlil Okafor, the first pick in the 2015 NBA draft, from his franchise. A 76ers win could cause an inverse relationship between the league's best and worst team, putting the 76ers on the upswing and the Warriors on the downward spiral nobody saw coming. (Video via Bleacher Report)

The Golden State Warriors will lose when ... they play the New England Patriots or the Carolina Panthers.

The triumvirate of undefeated teams has been impressive, but the "Highlander" theory of relativity states, "There can only be one," even if there are two different sports involved here. If anyone can beat the Warriors, it's another undefeated team.

Finally, the Golden State Warriors will lose when ... they go up against Adele.

Let's be honest here. Nobody's hotter than Adele. She's broken records with her new album "25" and inspired countless parodies, covers, etc. Adele is music's flawless victory, and if the Warriors were to ever challenge her dominance, by some strange sequence of events, they would surely lose.

The Warriors can extend their history-making record by beating the Suns in Phoenix on Friday, Nov. 27.