When Western Women Join ISIS, It's Not For The Nutella 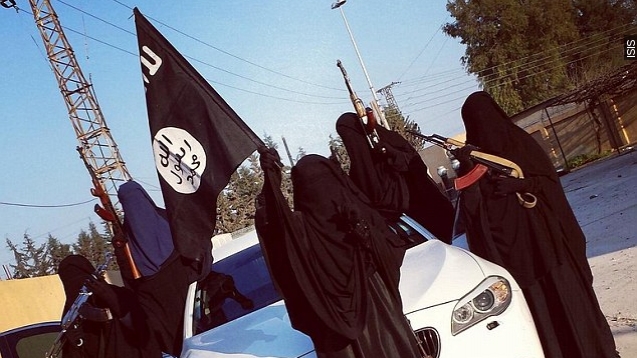 SMS
When Western Women Join ISIS, It's Not For The Nutella
By Jake Godin
By Jake Godin
May 29, 2015
When a Western woman is arrested for attempting to join ISIS or even succeeds, one of the first questions is, why? A new report seeks to answer that.
SHOW TRANSCRIPT

Western women are joining ISIS. But it's not because of Nutella.

"ISIS is talking online about jars of Nutella, pictures of kittens and emojis. These three images are in part helping ISIS recruiters lure Westerners into their fight because … " Carol Costello said during a February CNN broadcast.

Instead, a new report from the Institute for Strategic Dialogue suggests Western women — as many as 550 — have joined ISIS for a multitude of complex reasons stemming from their homeland and the Middle East. (Video via Corporación de Radio y Televisión Española)

As for the push factors, they are: Women feel isolated within Western culture, women feel that the Muslim community as a whole is being persecuted, and women feel there is a lack of international action being taken to amend that persecution. (Video via ABC)

Social media visuals of families being injured by airstrikes or starving children lumps both Assad and the West together as villains, with ISIS being portrayed as the only group truly fighting to save Muslims.

The pull factors, Saltman and Smith write, appear to be an obligation to religious duty, a general feeling of belonging and sisterhood, and romanticization of what it's like to live in ISIS territory.

But, as many others have also pointed out, the perception that living in a war-torn country is anything close to the paradise ISIS makes it out to be is false.

Quilliam Foundation counterterrorism researcher Charlie Winter wrote in March that any photos of ISIS women with guns or training for urban warfare only serve as propaganda, and that women really lead a more mundane life taking care of children and cleaning. (Video via ITV / "Good Morning Britain")

Saltman and Smith followed more than 100 women's profiles from 15 countries across various social media platforms and found the same thing, although many play a crucial role in disseminating the propaganda to attract others.

In the end, the study's authors say the best way to keep Western women from joining ISIS is to counteract the propaganda narrative. To do that, would-be recruits must be informed about what it's truly like to live in the so-called caliphate.