When Supreme Court Justices Step Outside The Court 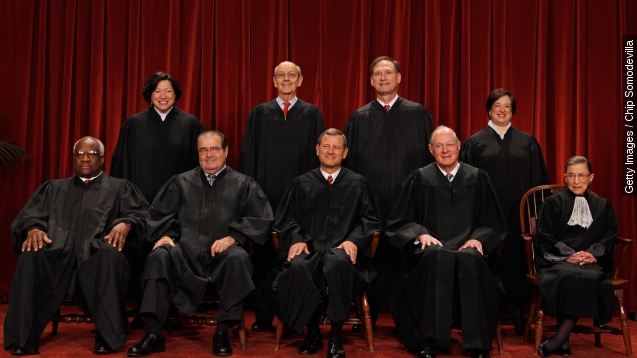 The U.S. Supreme Court is an intensely private place. Cameras aren't allowed in the courtroom, and the decision-making happens behind closed doors.

Which is why it's weird when the justices come out to play with the world outside the court.

Justice Stephen Breyer's been doing just that the past week to promote his new book, "The Court and the World." (Video via CBS)

He's been in the papers, on the radio and on TV. (Video via CBS / "The Late Show With Stephen Colbert")

And that's one reason justices come out into the public sphere: to promote their stuff.

Like Sonia Sotomayor promoting her 2013 book, "My Beloved World," or Antonin Scalia in 2012 promoting his book, "Reading Law." (Video via KCET, C-SPAN)

The other big reason is, unsurprisingly, to talk about the court. (Video via Yale University)

"You don't have to agree with Justice Ginsberg to know she does fabulous work," Justice Clarence Thomas said.

But there's a reason for the privacy, as Breyer tried to explain to Stephen Colbert on his latest outing.

Still, with the slew of high-profile cases the court heard over the past year, that privacy might be harder to come by. (Video via NBC)