When Raising The Minimum Wage, All That Glitters Isn't Gold 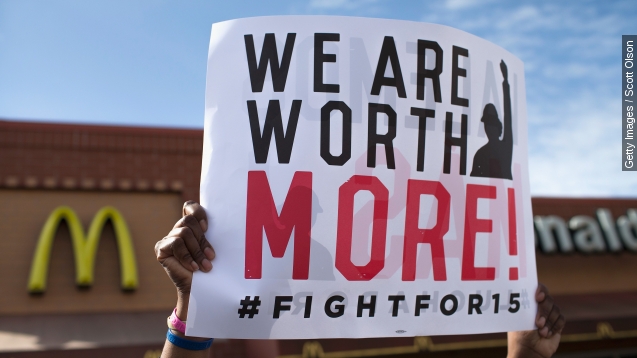 SMS
When Raising The Minimum Wage, All That Glitters Isn't Gold
By Katie Link
By Katie Link
July 28, 2015
As workers across the U.S. fight for higher wages, Seattle has experienced a few drawbacks after upping workers' paychecks.
SHOW TRANSCRIPT

We all want to be a little richer. But some people are way more vocal about it.

Gov. Andrew Cuomo says he's in support of the hike, which will be slowly phased in and only affects fast-food chains with more than 30 stores.

But as payday just got sweeter for some, hundreds of thousands are angry as the minimum wage will remain at $8.75 an hour for other industry jobs.

The federally mandated minimum wage is $7.25 an hour, but wages differ from state to state.

Currently, 29 states have a minimum wage higher than $7.25 an hour.

Additionally, some of the country's biggest cities are also on their way to passing their state's minimum wage including Los Angeles, San Francisco, San Diego, Chicago and Seattle.

Seattle's current minimum wage is $11 an hour. It'll be at $15 an hour by 2018. But, the padded paycheck for minimum wage employees seems to be backfiring.

"The minimum wage here in Seattle went to $11 an hour in April, on it's way to $15 an hour by 2018, and some people have figured out that with the pay raise they make too much money to stay on certain welfare programs," reporter Dan Springer told Fox News.

A Fox News article suggests that employees are asking bosses for less hours so they can stay on benefit programs for assistance with child care, rent and food costs.

So will the same play out in New York and other cities across the country? Skeptics are worried.

"It does inject money into the economy which is a good thing. On the other hand it does end up costing people their jobs. Some people who are worth it at $7.25 an hour aren't worth it at $9.25 or so on. So it's a mixed bag," Peter Coy told Bloomberg Business.

A study conducted by researchers at the University of California, San Diego found that minimum wage hikes actually had a negative impact on the economy, employment and income growth.

At the end of the day, if workers get paid more money to make that burger for you, you might end up paying more for that burger.