When Obama Unwinds, Camp David Is Rarely His Destination 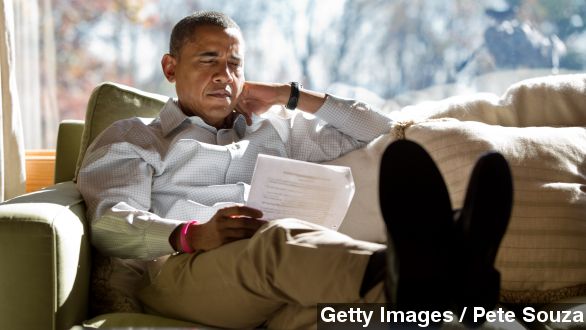 Tucked away in Maryland's Catoctin Mountains, Camp David has served as a hideaway for every president since Franklin Roosevelt.

The sprawling compound — complete with tennis courts, a skeet range, a bowling alley, riding trails and a heated pool — is the ideal setting for presidents looking to kick back and relax, vacation with their families and enjoy some time away from the public spotlight.

The informal setting can also be effective for behind-the-scenes deal-making. From Putin to Thatcher, Camp David has played host to some of the world's most powerful leaders. (Video via William J. Clinton Presidential Library)

Ashraf Ghani is the latest name on the guest list. But when the Afghan president meets with U.S. officials at Camp David Monday, President Obama will be 70 miles away in Washington. (Video via Office of Afghan President)

Instead, the two presidents will meet Tuesday at the White House.

It's not clear why they're meeting in Washington rather than the rustic refuge. It could just be a matter of logistics. Or it could be President Obama just isn't the biggest fan of Camp David.

Compared to his predecessors, he's made far fewer trips there.

Thirty-five at last count, which sounds like a lot until you consider President George W. Bush had made 119 visits by this time in his presidency.

"I look forward to holding additional meetings, including at Camp David. Harry Reid mentioned that he's been in Congress for 28 years; he's never been to Camp David. And so I told him, well, we're going to have to get them all up there sometime soon," President Obama said.

Those meetings haven't happened, though not for lack of trying.

"The only thing I hope he doesn't ask us to do is go to Camp David. That goes beyond the pale," then-House Speaker Nancy Pelosi said. (Video via C-SPAN)

It's become a West Coast Camp David of sorts with visits from Chinese President Xi Jinping and Jordan's King Abdullah. (Video via The White House)

And when President Obama's looking for some R&R, he seems to prefer getaways to his home state of Hawaii and weekends spent golfing at Andrews Air Force Base to nature walks at Camp David.

Obama, after all, is more of an "urban guy." Or at least that's how the first lady once put it, according to The Washington Post.

This isn't to say the president has ignored the wooded retreat completely.

"Somebody pointed out that I hadn't had any of my counterparts, who I've worked with now for three years, up to Camp David," Obama said in March 2012.

President Obama hosted the G8 summit there in 2012 — the biggest gathering of world leaders in Camp David's 70-year history. (Video via The White House)

Though critics say he had little choice. An estimated 10,000 protesters were expected to show up at the summit's original location in Chicago.