When It Comes To Environmental Damage, Thanksgiving Leftovers Add Up 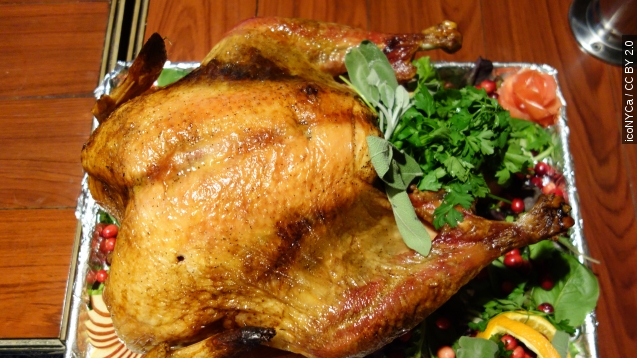 SMS
When It Comes To Environmental Damage, Thanksgiving Leftovers Add Up
By Ryan Biek
By Ryan Biek
November 26, 2015
The U.S. Department of Agriculture estimates 35 percent of turkey meat in America goes to waste. And guess when turkey is cooked the most ...
SHOW TRANSCRIPT

For many, the turkey is one of the highlights of Thanksgiving. So why do we waste so much of it?

The U.S. Department of Agriculture estimates the country wastes 35 percent of all turkey meat over the course of the year. And it's not hard to guess the day it's cooked the most.

A lot of that waste ends up in landfills –– a situation made worse by the greenhouse gases the food then releases into the atmosphere.

Supermarkets could be partly to blame. They've historically made turkey cheaper as Thanksgiving nears to get shoppers to buy the rest of the meal's ingredients and other impulse purchases from their stores as well.

Turkeys aren't only cheaper; they're bigger. Artificial insemination practices since the 1940s have now made the birds more than twice as big before slaughter than they were in the 1920s.

But a final reason for all the Thanksgiving overabundance, and waste in general, may be due to the best of intentions.

A senior advocate at the Natural Resources Defense Council's Food and Agriculture Program told The Huffington Post a lot of overabundance comes from trying to accommodate guests' individual tastes and dietary restrictions.

This video includes images from icoNYCa / CC BY 2.0 and Wisconsin Department of Natural Resources.