When Hologram Performers Get A National Tour 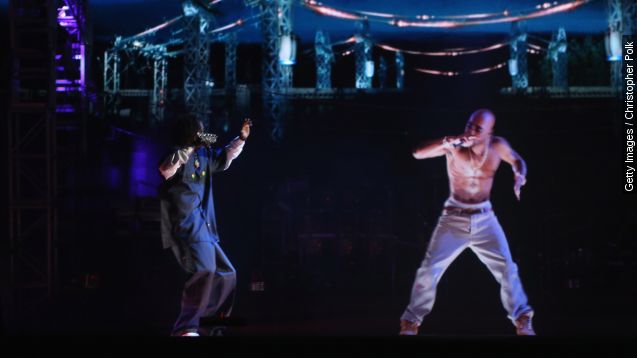 Remember that Tupac hologram that premiered at Coachella 2012?

"What the f*** is up, Coachella?" his hologram said to the crowd.

And Michael Jackson's performance of "Slave To The Rhythm" at the 2014 Billboard Music Awards?

Thanks to technology, we can go see our favorite deceased performers "live."

Starting in 2016, Dean Martin will launch a national tour starting in Las Vegas. And he's not the only one who's coming back from the grave. Hologram USA, the company behind Tupac's and Martin's performances, is also developing holograms of Billie Holiday, Bing Crosby and Whitney Houston. (Video via Universal Music / Dean Martin)

Oh, and if we ever run out of singers to bring back via hologram, we can always just, you know, create one.

Like Japanese pop star Hatsune Miku. Completely computer-generated, the 3-D hologram is backed by a live band when she performs. And if you're laughing over this concept, you should know she's already worked with major artists like Lady Gaga and Pharrell. (Video via Crypton Future Media Inc.)

The virtual singer has over 2.5 million Facebook followers and is launching a U.S. and Canadian tour in April. (Video via Crypton Future Media Inc.)

The realm of possibilities with holograms is huge. And the subject doesn't have to be deceased or a figment of our imagination, either.

Jimmy Kimmel has been using hologram technology to simultaneously host his show from Los Angeles and Nashville during the Country Music Awards in the past two years.

And in 2011, Mariah Carey performed a special Christmas concert in five different European locations at once.

So maybe this means someone will create an NSYNC hologram and send it on a national tour. I'm holding out hope on that one.