Whatever Happened To Reagan's 11th Commandment? 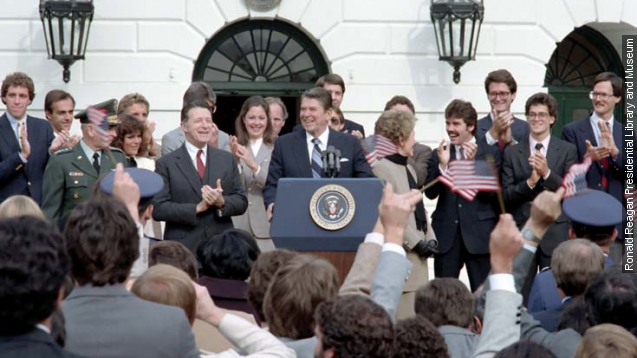 "The 11th commandment prevails, and that is, 'Thou shalt not speak ill of another Republican,'" Ronald Reagan said.

If these past few weeks are any indication ...

“Donald Trump is a narcissist and an egomaniac,” Bobby Jindal said.

The Republican candidates Wednesday night won’t be in observance.

Then again, their debate is being held at the Ronald Reagan Presidential Library.

And it's Reagan who often gets the credit for that unwritten rule.

Not that he should. California's then-Republican Party chairman actually coined the term in 1966. He was trying to prevent the intraparty personal attacks that doomed the GOP's presidential nominee, Barry Goldwater, just two years prior. (Video via Lyndon B. Johnson Presidential Library)

Reagan got wind of the phrase during his run for governor. He liked it so much, he made it his mantra. (Video via YouTube / Judge Rusty Johnson)

Later writing, "It's a rule I followed during that campaign, and I have ever since."

But no matter the original author of the GOP's most sacred commandment, the 2016 hopefuls would be wise to follow it.

Or risk burning another Bush. (Video via Paramount Pictures / "The Ten Commandments")

This video includes an image from the Ronald Reagan Presidential Library and Museum.