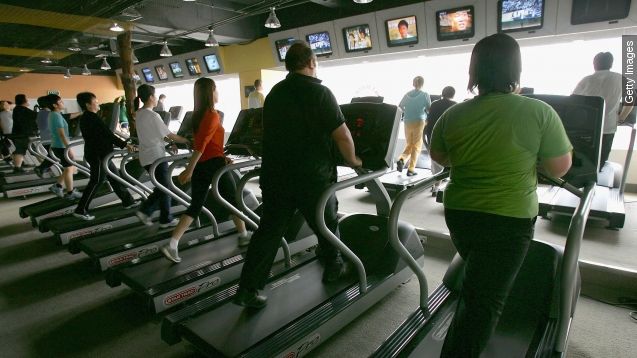 SMS
What You Watch At The Gym Can Mean More Than You Think
By Cody LaGrow
By Cody LaGrow
January 15, 2016
The type of program you watch while exercising could have an impact on your overall workout.
SHOW TRANSCRIPT

Working out while watching TV — it's my way of keeping up with my cardio and the Kardashians simultaneously.

But what does what you watch while working out say about you, and how does it affect your workout? It turns out your choice of channel can either hinder that uphill climb or up your game.

An ABC News article revealed if you watch cooking shows at the gym, you might have a food obsession resulting from severe self-restriction. Cooking shows allow a viewer to fantasize about food and experience the pleasures of it without eating it. But don't judge too hard just yet.

That very same article also explains the length of episodes may have more to do with your appreciation for the brevity of, let's say, "Barefoot Contessa." A snappy half-hour with Ina can make that 30 minutes of cardio seem quicker.

Another study published in the international journal Frontiers in Autonomic Neuroscience revealed that watching someone else exercise can be a good thing because of something called muscle sympathetic nerve activity. That means watching someone else work out causes your heart rate, breathing and sweat release to increase. So, tuning into the big game can increase your chances of a better workout.

So even though a Harvard study linked watching TV to weight-gain, it doesn't have to. Netflix has a diagram that shows how much you can burn on the treadmill while binge-watching shows like "Orange Is the New Black."

But before you steal your ex's Netflix password to sweat to "Scandal," Women's Health said watching TV on the treadmill could cause neck strain, promote bad form and encourage you to get into the same routine.

Or you can just watch "Pretty Little Liars," anyway. I say do whatever it takes to distract yourself from discomfort if you're trying to get that "A" in shape.