What You Need To Know About Those New EMV Credit Cards 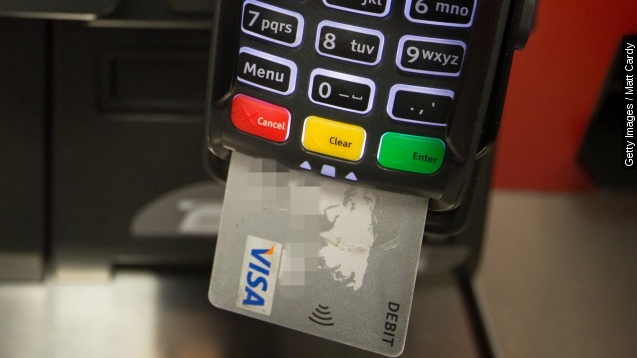 SMS
What You Need To Know About Those New EMV Credit Cards
By Katherine Biek
By Katherine Biek
September 8, 2015
More and more people are receiving new credit cards with microchips in them. Here's everything you need to know.
SHOW TRANSCRIPT

People across the U.S. have been receiving new credit cards from their banks recently. And while these new cards might look similar to old ones, they're vastly different technology wise.

These cards have several different names: Chip-and-pin cards, chip-and-signature cards or EMV, which stands for developers Europay, MasterCard and Visa.

Whatever you call it, they all have microchips embedded in them. Users will now slide these cards into chip-enabled terminals and either input a PIN number or sign their signature when paying for items, instead of swiping their traditional magnetic-strip credit cards.

While this is new technology for the U.S., these chip technology cards have been used for years in other countries across the world. (Video via WKRC)

The National Retail Federation has been advocating for chip technology in the U.S. for years because it's much harder to hack and it made a big push after the massive data breaches at Target and Neiman Marcus in 2013.

"Whenever the chip card is used with a chip-enabled terminal a unique one-time code is created for the purchase to be approved. This is nearly impossible for counterfeit cards to duplicate." (Video via U.S. Bank)

Of course, this security feature currently only protects those using their cards in the store — not those paying for purchases online.

Currently, consumer losses from fraudulent charges are paid out by either the bank or the payment processor, but after Oct. 1, CreditCards.com says the liability "will shift to whichever party is the least EMV-compliant." (Video via CreditCards.com)

Wal-Mart, Target and Whole Foods all say locations will have the new chip-enabled terminals for these new cards in place by that deadline.