What You Don't Know About Those Other Democratic Candidates 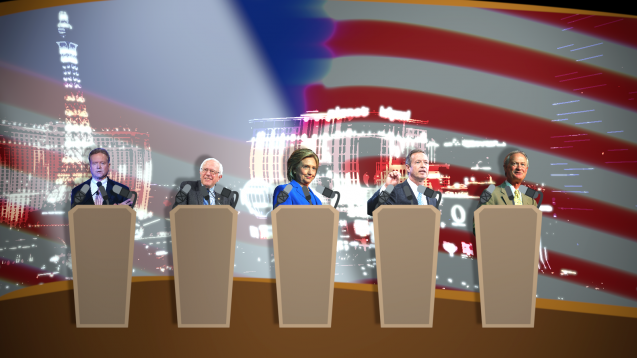 SMS
What You Don't Know About Those Other Democratic Candidates
By Kate Grumke
By Kate Grumke
October 12, 2015
Three candidates in the debate are polling at less than one point, but they'll have their chance Tuesday to bring their ideas to the mainstream.
SHOW TRANSCRIPT

The first Democratic presidential debate will have candidates standing in order of where they are in the polls, but a literal reflection of poll numbers would look more like this:

Former Secretary of State Hillary Clinton has been dominating both parties on name recognition (with one notable exception) and during the first Democratic debate she'll be center stage, reflecting her large lead in the polls since August.

To her right will be the Democratic socialist Senator from Vermont Bernie Sanders, who has been drawing huge crowds and has made the rounds on late-night talk shows. As he touts his progressive, liberal talking points, he's seen a steady rise in the polls, even topping Clinton in New Hampshire.

So for the other three candidates who will be in the debate, it could be a make-or-break moment where they'll finally get to introduce themselves to the public.

O'Malley's team wants to paint him as the best alternative to the two front-runners, and he hopes to be seen as more progressive than Clinton. (Video via Martin O'Malley for President)

He signed gay marriage into law as governor of Maryland. He also disagrees with Clinton on what the U.S. should be doing in Syria. (Video via Martin O'Malley for President)

"Secretary Clinton's always quick to military intervention. I believe that a no-fly zone right now, it's not advisable," said O'Malley.

Oh, and did we mention he's in a Celtic band?

Webb's views pit him against most of his opposition. He is a Vietnam veteran and served as Navy secretary under Ronald Reagan. (Video via Jim Webb 2016)

He was consistently opposed to the Iraq War, but he also has more conservative views. He has come out against President Obama on the Iran deal. He's to the right of most Democrats on the environment — and supports the Keystone pipeline.

But when it comes to his economic goals, he falls in line with other Democrats, talking most about economic inequality. How he would reduce inequality is a different story. (Video via Jim Webb 2016)

"This might sound odd coming from the Democratic Party," said Chafee.

"All of this sounds odd coming from the Democratic Party," he said.

"We need to lower corporate tax rate. We need to eliminate the loopholes. We need to get this money back in, these trillions of dollars out there that are being held offshore because of our tax laws," Chafee said.

Chafee has been in politics since 1985. He started out as a Republican, was the only senator in his party to vote against the Iraq War, then became an Independent and is now a Democrat. (Video via Chafee 2016 Committee)

As governor of Rhode Island, Chafee signed gay marriage into law and also signed a bill that would cut greenhouse gas emissions 80 percent from 1990 levels by 2050. He also supports the Affordable Care Act and raising the minimum wage.

"That muscular approach on Libya and Iran back then, I have some differences with that," he said.

He wants more open dialogue with countries like Russia and Iran, to work through differences.

It will be up to these three candidates to prove themselves on the debate stage Tuesday night. CNN's coverage begins at 8:30 p.m. Eastern.