What Would Aristotle Say About Greece's Financial Woes? 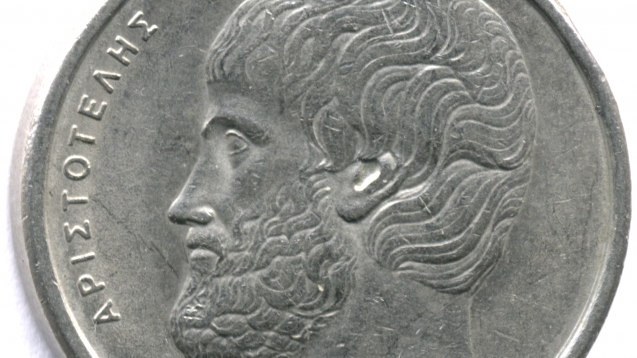 SMS
What Would Aristotle Say About Greece's Financial Woes?
By Matt Patston
By Matt Patston
July 19, 2015
Perhaps some Greeks could use a refresher on Aristotle's 2,000-year-old philosophical teachings.
SHOW TRANSCRIPT

Long before Greece gave us the financial meltdown of the decade, the country gave us finer things.

For example, the "Iliad" and the "Odyssey," a rich and vivid mythology and the foundation of modern philosophy. (Video via PBS)

That got us thinking: What would Aristotle think about all of this financial hullaballoo?

The Greek philosopher died over 2,300 years ago, but works like "Nicomachean Ethics" are still studied today — and some people in Greece could use a refresher on the classical text.

"Nicomachean Ethics" is about how to live happily, and Aristotle thought this meant living with virtue, or the perfect mean between two behavioral extremes — like always eating versus never eating at all.

Aristotle called this happiness "eudaimonia," which is basically the condition of actively deciding to live well and occupy your mind with good things.

One attains eudaimonia by knowing their own spirit and striving for balance in their lives' virtues. It turns out, Aristotle mentioned specific virtues that seem apt for modern-day Greece.

Greek officials who took bribes in exchange for allowing tax evasion could learn a thing or two about Aristotle's first virtue: temperance, or the practice of not allowing pleasure to dictate all your decision making.

The politicians who ran up an enormous budget debt may need to read the section about generosity, which "Nicomachean Ethics" says is the balance between giving too much and not giving enough. (Video via Alexis Tsipras)

The next virtue, munificence, is closely related: spending money for only appropriate occasions.

That means, for example, a government probably shouldn't do things like guarantee that the country's pastry chefs can retire at 50 — which Greece did.

Some might say that fiery former Finance Minister Yanis Varoufakis, who left office because of his hostile relationship with Greece's creditors, could hone his virtue of good temper. (Video via Brookings Institution)

Aristotle wrote that justice, the sense of knowing what's fair and what you deserve, is the virtue that unites all other virtues. In the context of bailout negotiations, this virtue seems particularly potent. (Video via IMF)

The philosopher believed that perfection was impossible but always a good thing to shoot for — so he would probably say it's not too late for Greeks to pick up a copy of "Nicomachean Ethics."

Of course, Aristotle is no longer with us, and this is all conjecture. If philosophers got to retire with a state pension at 50, maybe he wouldn't have so much to say about an unvirtuous debt.