What Went Wrong With The New York Giants Sunday Night? 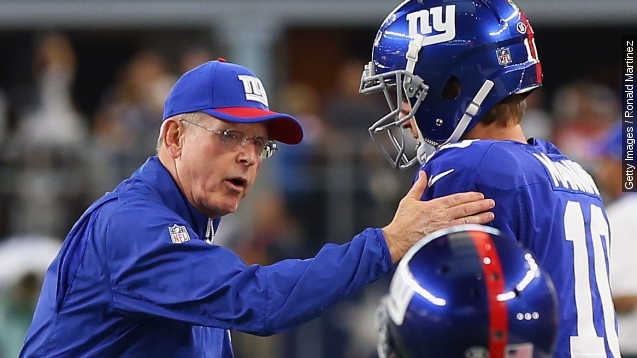 The New York Giants suffered a bewildering loss to the Cowboys Sunday night, and now everyone's trying to figure out what went wrong.

"What in the world were the Giants doing down at the goal line?" said NBC’s Mike Florio. (Video via NBC Sports)

"It is so absolutely disappointing and unnerving," said radio host and former NFL player Boomer Esiason. (Video via CBS Sports)

“Know the situation!” ESPN Radio host Mike Golic said Monday morning. “If you’re going to pass, great. If nothing is there, fall down!” (Video via ESPN)

The controversy is all about New York’s final drive. Up by 3 and deep in Dallas territory, the smart play would have been to run down the clock. But instead, quarterback Eli Manning threw an incomplete pass on third down.

Had Manning kept the ball in his hands and taken a sack, the clock would have kept running, likely for nearly 40 seconds before the next play.

Instead, the Cowboys had just enough time to march down the field, capped off by a game-winning touchdown catch by Jason Witten with just seven seconds left.

In addition to throwing the ball away late, Manning said Monday he told running back Rashad Jennings not to score when the Giants approached the goal line.

But that doesn't make much sense. If Jennings had scored, the Giants would have been up at least nine and most likely 10 points — an almost insurmountable lead with less than two minutes left. (Video via NJ.com)

Jennings followed the order anyway, and later said that he could have scored easily on one of the runs if he wanted to.

The gaffe inspired speculation about the job security of Giants head coach Tom Coughlin. His G-Men went 6-10 last year, and he hasn’t won 10 games in a regular season since 2010. (Video via YES Network)

But Coughlin has won two Super Bowl titles since taking the job in 2004, cited by many as the reason he’s still on the sideline.

Coughlin and Manning certainly owned up to their mistakes following the game. In fact, it seemed like each was competing to take the most blame, starting with Coughlin at his postgame press conference.

“It’s my fault at the end of the game,” Coughlin said. “There’s nobody else to blame but me. The decision to throw the ball there on third down was not a good decision." (Video via ESPN)

And Manning echoed his sentiment, saying, “That’s 100 percent on me.”

Who gets blamed won’t change things of course. Giants fans will just have to wonder what could have been.