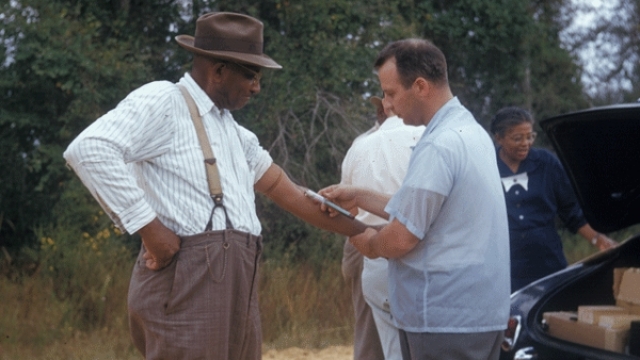 SMS
What We'll Never Know About The Study In Which Black Deaths Mattered
By Christian Bryant
By Christian Bryant
August 25, 2016
The reporter who helped end the infamous Tuskegee syphilis study discusses what we may never know about the study's origin or its effects.
SHOW TRANSCRIPT

For 40 years, the U.S. government-operated Public Health Service conducted what was known as the Tuskegee syphilis study — one of the darkest chapters in American history. Now, over 40 years after the study ended, we still don't know — and might never know — the full extent of its effects.

"We have no idea how many wives, girlfriends, children inherited the disease and also died or were forever crippled by its effects," former Associated Press reporter Jean Heller said.

And the study might have continued if not for a 1972 article from Heller.

"Everyone who knew about this and didn't blow the whistle — that didn't shout to high heaven that this is wrong — is culpable in my opinion," Heller said.

Syphilis was considered a national health crisis in the early 20th century, and many doctors at the time thought syphilis and other medical complications were affected by race.

SEE MORE: Both Black And White Americans Believe There Is Widespread Racism

To study the disease, researchers found a population of poor, black, syphilitic sharecroppers in and around Tuskegee, Alabama, during the Great Depression. Nearly 400 of the participants had syphilis while another 200 — the control group — did not.

"They just went to doctoring on us and said they were going to treat us. They just said, 'bad blood,'" survivor Charlie Pollard said.

"Here are American medical doctors who singled out a population of several hundred human beings that they could've treated for their disease," Heller said.

In the end, as many as 100 men died from complications related to untreated syphilis, and the message was very clear: black deaths mattered.

"Medical doctors ... deliberately let them die — wanted them to die for what they could discover from their bodies later," Heller said.

Heller said she was 23 years old when she first learned about the Tuskegee study and knew that her story would be "explosive."

"After the story broke, there was this incredible public outcry. Sen. [Edward] Kennedy had held very public congressional hearings on this. There was a riot at the Department of Health, Education and Welfare. Their own employees rioted, and the secretary shut this program down the same day," Heller said.

The study and the aftermath are well-documented in films and books. But there are still things we might never know. And for Heller, that goes back to the very beginning.

"I still have not heard the answer to the very simple question of why. Why did anybody approve this study?"

The Tuskegee study was meant to build off a related study done in Oslo, Norway, where researchers retrospectively examined the medical records of whites with untreated cases of syphilis.

No black people were involved in the initial study. According to one researcher, that made the population of syphilitic men in Tuskegee a "ready-made situation."

SEE MORE: Chinese Scientists Will Be First To Use CRISPR Gene Editing On Humans

Beyond that, Heller believes there's no way to know just how many people were directly or adjacently affected by the study or its disclosure.

Survivors, victims of the study and their families won a $10 million settlement from the U.S. government, and the study's disclosure led to modern medical ethics procedures.

But Heller says 40 years later, there's still at least one lesson to be learned from the Tuskegee syphilis study.