What We Know About the Paris Terror Suspects 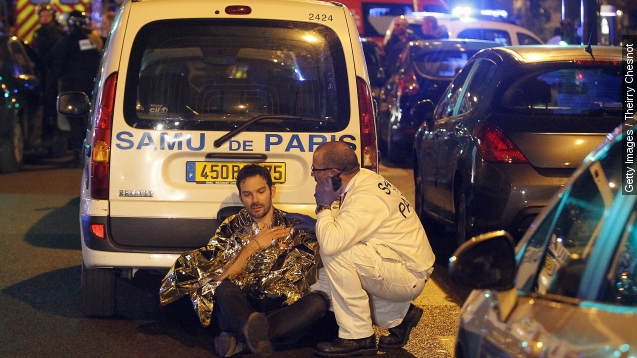 SMS
What We Know About the Paris Terror Suspects
By Ben Lawson
By Ben Lawson
November 14, 2015
Belgian police have taken three individuals into custody who are connected to a vehicle seen near one of the attack sites.
SHOW TRANSCRIPT

Police in Brussels have reportedly made three arrests in connection with the series of terrorist attacks in Paris that left 129 people dead and more than 350 injured.

The people arrested were linked to a black car with Belgium license plates spotted near the Bataclan theater around the time of the attack.

Seven individuals suspected of carrying out the attacks are confirmed as dead. Authorities have yet to release their names. (Video via France 24)

And German authorities arrested a man last week who they say is linked to the Paris attackers. They say he had machine guns and explosives in his car at the time.

The Wall Street Journal spoke to security officers at the Stade de France stadium who say they discovered a man wearing a bomb vest. The man then activated the explosives while backing away from security.

The Liberation reports that one of the men is a French national who was already known to police as an extremist. There are also reports that Syrian, Egyptian and French passports were found near some of the suspects. (Video via CBS)

ISIS is claiming responsibility for organizing the attacks. However, the authenticity of the statement has not yet been confirmed. (Video via BBC)

But hours before that statement was released French President Francois Hollande blamed ISIS for the attacks.

The first American casualty has also been confirmed in the attack. Nohemi Gonzalez, a 23-year-old student at California State University in Long Beach, was killed in a restaurant.