What We Know About Iran's Ballistic Missile Program 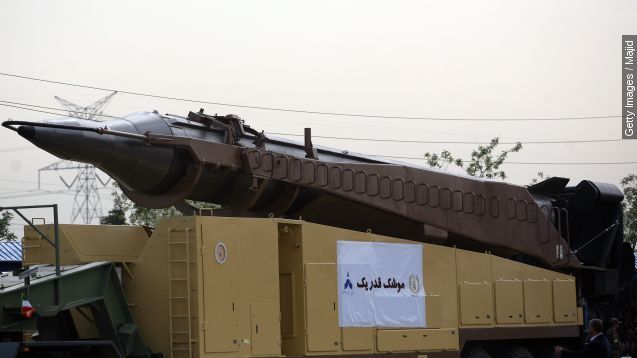 SMS
What We Know About Iran's Ballistic Missile Program
By Jake Godin
By Jake Godin
December 31, 2015
The U.S. is reportedly prepared to sanction Iran over its missile program, a consequence understood in the nuclear agreement.
SHOW TRANSCRIPT

The U.S. is getting ready to sanction Iran. Why? Ballistic missiles. (Videos via The White House and SimaNews)

That's according to a recent Wall Street Journal article, which says the U.S. is looking to sanction nearly 12 companies and individuals connected to Iran's ballistic missile program. According to the Journal, the possibility of such sanctions was understood as part of the recent nuclear agreement.

Iran hasn't exactly been shy about showing off one of its missiles in the months following the nation's nuclear agreement with the U.S. (Video via European Commission)

Whether it was showcasing the Islamic republic's expansive underground missile base for the first time in October or test firing medium-range ballistic missiles in October and November.

Iran's ballistic missile program is pretty extensive. According to the U.S. Institute of Peace, it's the largest and most diverse in the Middle East. (Video via Press TV)

Although, it's not as advanced as Israel's.

Iran has quite a few variants in its arsenal of ballistic missiles. Ranges vary from 124 miles to 1,200 miles.

At least one variant can reach Iran's top rival, Israel. Though analysts don't believe it's accurate enough to target anything specific. (Video via Prime Minister of Israel)

Iran's been under international sanctions over its missile program since 2010 and under U.S. sanctions even longer. (Video via Press TV)