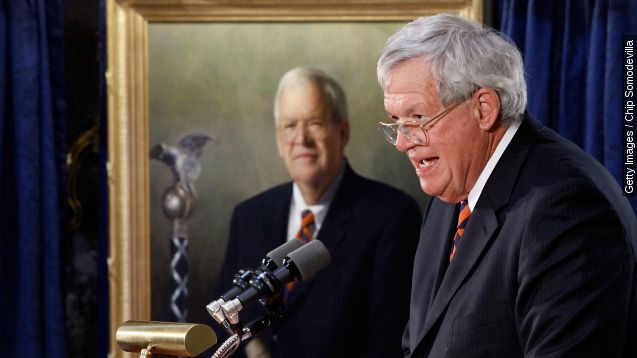 Former Speaker of the House John Dennis Hastert's federal indictment Thursday was light on details — specifically, what did Hastert do to "Individual A"?

The indictment accuses Hastert of violating banking regulations and then lying to federal investigators about it, but the interesting thing is why.

The unnamed person in the indictment referred to as Individual A allegedly met with Hastert in 2010 and got the former congressman to agree to pay $3.5 million in what's being called "hush money" to conceal some misconduct on Hastert's part.

The indictment doesn't say what the misconduct was or when it took place, but it does note that Hastert had a long tenure as an Illinois high school teacher and coach before he was elected to Congress. And the case is being prosecuted in Illinois, not Washington, D.C.

Political reporters immediately wanted to know what exactly Hastert did that he felt warranted $3.5 million to keep quiet. It's possible that information could come out as the case progresses, but for right now, as Ezra Klein pointed out: "It's hard not to read this Hastert indictment and get a very, very bad feeling about what was going on here."

Mike Rogers, former House Intelligence Committee Chairman, told CNN: "Lots of questions. Was he extorted? Likely, the way they've written the indictment where it says 'Individual A,' means that Individual A is likely to have cooperated with the FBI at some point in this investigation. So I think there's going to be a lot more story to be told here."

Each charge of Hastert's indictment carries a maximum sentence of five years in prison and a $250,000 fine.