What Was Different About This Year's Republican National Convention? 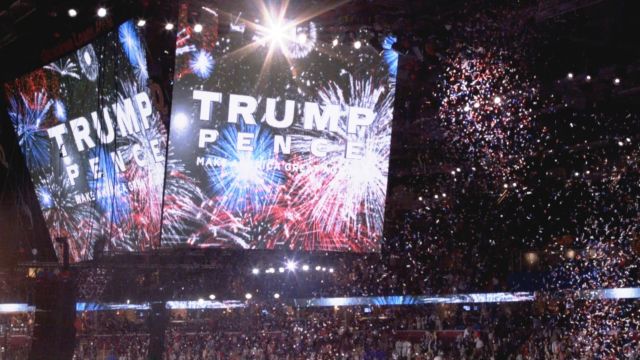 "It's Day 4, and that means the balloons have fallen. Right now, you're hearing the aftermath of that as all of them are popped across the convention floor. We have Charles Benson with us from our sister station in Milwaukee. Kate and I have covered one convention," Newsy's Zach Toombs said.

"As of this moment," Newsy's Kate Grumke said.

"Charles has covered eight conventions, so we have a question for you. How is it different now, in the age of Facebook Live, compared to 10, 20 years ago?" Toombs asked.

"I thought it was interesting because I could hear the crowd reacting to the lines that he used that they liked, and then I could watch on Facebook Live things crawl across the page: thumbs up or the sad faces or whatever the emojis were. And nowhere have I ever covered a convention where I can get that kind of immediate direct response," Benson said.

"Here you are in a room with all of the most ardent supporters of Donald Trump, and you're looking around, and the energy is so positive, everybody's freaking out, but if you look at Twitter or when we go live on Facebook, those are random people, and it's not all positive," Grumke said.

"Let's talk about the content of Donald Trump's speech; he had a lot of numbers. These numbers, for the most part, are solid, but they focus on very small portions or lack some context. For example, violent crime — he talked about violent crime," Toombs said.

"These are the facts. Decades of progress made in bringing down crime are not being reversed," Trump said.

"Seventeen percent increase (is it in violent crime in major cities?) but then when you look at the broad graph, you see that it's a 17 percent uptick after a steady decline after the last eight years and after the last 20, 25 years," Toombs said.

"And it's so small compared to what it was," Grumke said.

"It is all about messaging, and in this one, we thought this could have been the most unscripted convention because that's who Donald Trump is, but in a lot of ways, and I watched that speech because I could seen on the screen the text of it on a big monitor they had, he stuck to that script pretty close," Benson said.

"Thanks for tuning in and for following along with us at the RNC. We'll be at the DNC next week, so check back in with Newsy then," Grumke said.