What To Know About American Pharoah And The Preakness Stakes 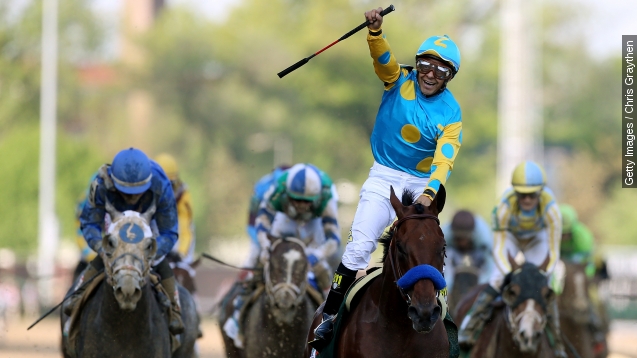 Thirteen years ago, Bob Baffert narrowly missed becoming a Triple Crown winning trainer after his horse War Emblem won the Kentucky Derby and the Preakness, but came up short in the Belmont Stakes. (Video via Maryland Racing / Preakness Stakes)

American Pharoah beat out Firing Line and Dortmund in the final furlong to win the Kentucky Derby.

"It means he could lose valuable ground should he veer left coming out of the gate, because there's a gap there. It also means that he may have to use his speed earlier to hold his position," ESPN reports.

You’ve got to go back to 1994 for the last time a Preakness winner came from the rail position. Dortmund, sits second and Firing Line is in the number eight spot.

“To be honest, I think Firing Line has the tactical advantage of the outside post position. … He really can just sit outside and see the race unfold inside of him. He has a really strong post position,” Horse Racing TV analyst Gabby Gaudet told America’s Best Racing.

The unlucky seeding is something Bob Baffert, the trainer for both American Pharoah and Dortmund, has tried to stay positive about. He spoke with reporters earlier in the week.

"All we can do is keep them ready and keep them healthy and happy, hope they break well, get in good position," Baffert told The Baltimore Sun.

Baffert certainly has a solid track record though. A horse of his has won the Preakness five times, the most recent coming in 2010 with Lookin At Lucky.

There’s a bit of a wildcard in this year’s eight-horse field though.

"Wayne Lukas doesn’t show up unless he thinks he can win. He does not show up to be cool. He comes in with purpose and determination," WJZ-TV  reports.

Horse Mr. Z entered the Preakness lineup late and under new ownership. While Mr. Z’s unimpressive 13th place finish in the Kentucky Derby is nothing to strike fear into his competitors, trainer Wayne Lukas is. Lukas is a six time Preakness winner, his most recent with Oxbow in 2013.

If American Pharoah can pull off a victory at Pimlico, he will then set his sights on the Belmont Stakes June 6th in his bid to be the first Triple Crown winner in more than 35 years.

This video contains images from Getty Images and music from Breakzlinkz / CC BY 3.0.