What To Expect From Obama's First Campaign Appearance With Clinton 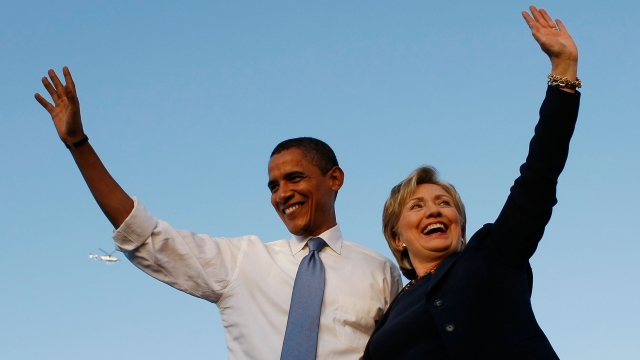 SMS
What To Expect From Obama's First Campaign Appearance With Clinton
By Ben Lawson
By Ben Lawson
June 29, 2016
President Obama is expected to switch from bashing Donald Trump to talking up Hillary Clinton at his first appearance on the campaign trail this year.
SHOW TRANSCRIPT

Obama will appear alongside the presumptive Democratic presidential nominee in Charlotte, North Carolina. He planned on appearing at a Clinton event two weeks ago but had to reschedule due to the nightclub shooting in Orlando.

It seems the location for the campaign stop was picked carefully. North Carolina is considered a battleground in the upcoming election. Obama won it in 2008 but narrowly lost it to Romney in 2012.

"Look, I know how hard this job can be. Thats how I know Hillary Clinton will be so good at it. In fact, I don't think there's ever been someone so qualified to hold this office," Obama said.

Obama already gave Clinton his endorsement earlier in June after separate conversations with her and her Democratic rival, Bernie Sanders.

White House Communications Director Jen Psaki told Politico that Obama wants to turn the conversation away from whether or not Clinton is better than Donald Trump.

Psaki said, "He wants to spend most of his time making the strong, optimistic case for the country under a future President Clinton, and why she presents the best case to be his successor."

This video includes clips from Hillary for America and the White House and images from Getty Images. Music by Frenic / CC BY 3.0.