What This Year's Extra Second Could Mean For The Internet 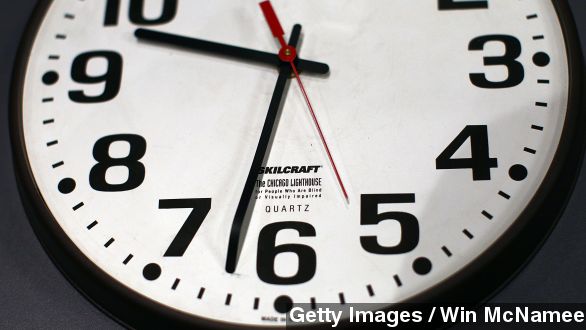 SMS
What This Year's Extra Second Could Mean For The Internet
By Matt Moreno
By Matt Moreno
January 7, 2015
Chunks of the Internet went offline in 2012, the last time scientists added an extra second to clocks to match Earth's slowing rotation.
SHOW TRANSCRIPT

If you've got plans June 30, then you'll have a little extra time to attend. A whole extra second, to be exact.

The decision to add an extra second to June 30 comes from the International Earth Rotation Service in Paris. The Earth's rotation is gradually slowing, so to sync up those atomic clocks most accurately, an extra second needs to be added every few years. (Video via NASA)

A second more a day every so often is no big deal, right? Your day-to-day activities likely won't be affected.

But the last time this happened in 2012, it resulted in a good chunk of the Internet going offline, downing sites like Reddit, LinkedIn, Yelp and more.

Gizmodo explains the computer problems: "It mostly has to do with NTP, or the Network Time Protocol computers use to sync with atomic clocks. If a computer sees the same second twice in a row, it logically thinks something went very wrong. There are fixes to this, but they've obviously not been implemented across the board."

And there are fears it might happen again this year.

That's part of the reason why there's been lobbying, especially from officials in the U.S., to do away with the extra second.

But The New York Times reports: "Britain, along with Canada and China, would like to keep the current keeping system, arguing that, in the 40 years that leap seconds have been gracefully inserted in our midst ... there have been no problems to speak of, and the worriers have greatly exaggerated the potential for havoc. Remember Y2K?"

The Times article, though, was written in January of 2012, when delegates were meeting that year to decide whether to keep the extra second. This was months before it caused parts of the Internet to crash.

So yeah, we have to deal with Earth's rotation slowing down — but that's better than having the Earth stop rotating entirely for a second.

"Yeah, that would be disastrous. ... If you stopped Earth and you weren't seat belt-buckled to the Earth, you would fall over and roll 800 mph due east. It would kill everyone on Earth," astrophysicist and science commentator Neil deGrasse Tyson said on CNN.