What The Virgin Galactic Crash Means For Space Tourism 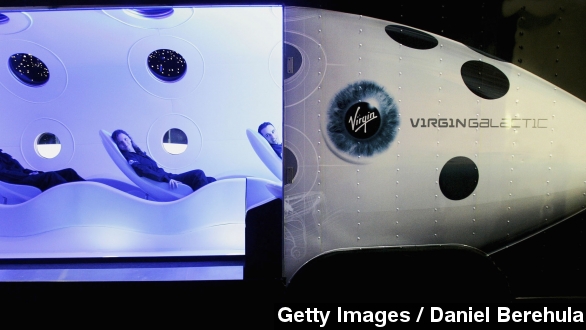 SMS
What The Virgin Galactic Crash Means For Space Tourism
By Jake Godin
By Jake Godin
November 1, 2014
There's new speculation over the future of space tourism after two major spaceship accidents happen in a single week and resulting in one fatality.
SHOW TRANSCRIPT

Space travel can be risky, that's a given. Just getting up out of the Earth's gravitational pull requires massive amounts of energy.

But the explosion of Orbital Science's Antares rocket on Tuesday and Virgin Galactic's SpaceShipTwo crash on Friday has made that all the more real for space industry watchers.

Two spaceship accidents in one week, one resulting in the death of a pilot and seriously injuring another, has prompted the question — what does this mean for space tourism?

Virgin Galactic had hoped to give anyone willing to shell out a quarter of a million dollars the ability to travel to space by next October. The waiting list of space tourists included names such as Leonardo DiCaprio, Justin Bieber and Ashton Kutcher.

An aerospace and defense industry senior analyst tells The New York Times that while Virgin Galactic was one of the leading companies in commercial space flight, Friday's accident has pushed it back considerably.

A science editor at BBC had a similar view, calling Friday's accident a "massive setback" for Virgin Galactic partly due to its impact on how people perceive the safety of space tourism.

But some, including folks who purchased tickets to fly on a Virgin Galactic flight, say this is far from the end of space tourism.

PETER DIAMANDIS VIA AL JAZEERA: "I really think anybody saying that we should stop and think about this is naive in saying that you know if that had happened with the first automotive or airplane accident then we would still be on horses."

A former astronaut told USA Today that while he thinks the crash will certainly affect peoples' impressions of commercial space flight in the short run, the long-term impact will be minimal.

Then again, Chris Taylor at Mashable says we shouldn't even be calling what Virgin Galactic is doing "space tourism" in the first place.

"Everyone who boards a Virgin Galactic flight, whenever such a thing happens, will be a space pioneer — and they'll assume all the risks that all pioneers in previous centuries did. ... This is exploration, not a safari. Nobody's a tourist yet."

But a writer at Wired disagrees, saying Virgin Galactic isn't trying to empower a new wave of pioneers at all but instead "building the world's most expensive roller coaster, the aerospace version of Beluga caviar. It's a thing for rich people to do."

This is the second accident involving Virgin Galactic's SpaceShipTwo but the first to occur mid-flight. While there's no word on whether anyone with a $250,000 ticket has asked for a refund quite yet, the company does offer them.