Chinese Company Alibaba Could Have A Record-Setting U.S. IPO 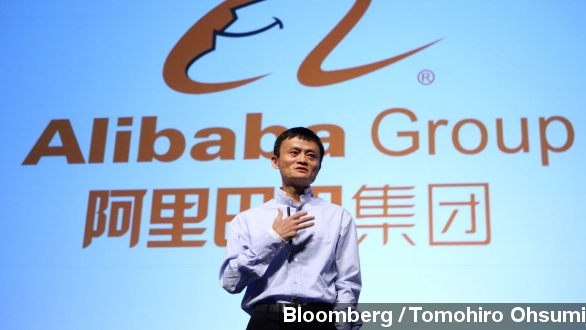 SMS
Chinese Company Alibaba Could Have A Record-Setting U.S. IPO

By Christian Bryant
May 6, 2014
The Chinese e-commerce company may not have widespread name recognition in the U.S., but it's U.S. IPO could be the largest ever.
SHOW TRANSCRIPT

Chinese e-commerce company Alibaba filed paperwork Tuesday for what's expected to be one of the largest initial public offerings in history.

But before you start looking at ways to tie the name of the company to the main character of a Middle Eastern folk tale — as I have — let's start with the basics. (Via Wikipedia / Ali Baba)

"Alibaba is an online marketplace where mostly Chinese companies and some Western companies sell their products to customers and other businesses." (Via The New York Times)

"The Chinese company that's quite a combination, if you would, between Amazon, eBay and Google." (Via Bloomberg)

The man at the center of Alibaba is Jack Ma, a billionaire entrepreneur who's previously worked as an English teacher. So how did he become the Zuckerberg of China? (Via ABC)

As Ma has probably told reporters hundreds of times by now, he went online for the first time in 1995 during a trip to Seattle. The Washington Post reports Ma "saw how little information existed about Chinese companies," so decided to build one of his own — although he says he doesn't know much about technology.

In 1999, he founded Alibaba. He and 17 other people started working out of his apartment and what do they have to show for it now? Ridiculous numbers.

Let's talk revenue and profit: Forbes says "Alibaba stated revenues of more than $6.5 billion on profits of about $2.8 billion" nine months into its 2014 fiscal year. The company also reported as many as 231 million active buyers in December of 2013.

The company that began in an apartment is now valued at upwards of $200 billion — Facebook's IPO valuation was $104 billion — and, according to Bloomberg, Alibaba is expected to raise more than $20 billion in its offering. That'll beat out Visa's $19.65 billion and Facebook, which had the largest tech IPO at $16.01 billion.

But why is a Chinese company doing a public offering in the U.S.? A senior analyst at Morningstar, an investment research firm, told Mashable, "By listing in the U.S. you open up the doors to a lot more potential investors. ... The U.S. listing will add a layer of creditability."

But Alibaba isn't the only company benefitting from the U.S. IPO. USA Today reports Yahoo acquired a 40 percent stake in Alibaba for $1 billion in 2005. Yahoo sold almost half of that for $7 billion in 2012. The company now owns almost a fourth of Alibaba, a share which could be worth billions of dollars following a very favorable IPO. (Via Flickr / superfluity, USA Today)

Alibaba put down $1 billion as a placeholder for its paperwork filed with the Securities Exchange Commission. We won't know the exact amount Alibaba will raise until its IPO, which is expected later this year.