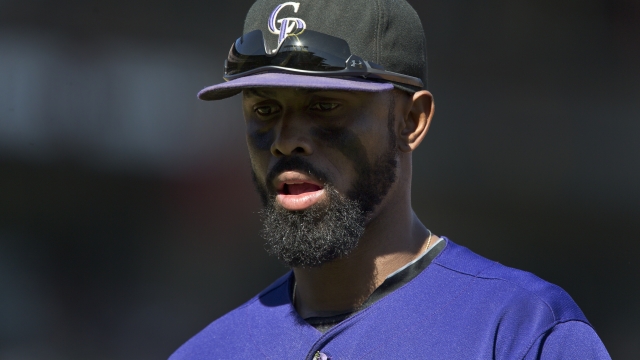 SMS
What Should We Do About Athletes Accused Of Domestic Violence?
By Carter Woodiel
By Carter Woodiel
June 26, 2016
Jose Reyes has a new contract with the Mets, again raising the question of how to handle athletes accused of domestic violence.
SHOW TRANSCRIPT

The New York Mets have signed Jose Reyes, which was good news for fans who wanted to see Reyes return to his first MLB team.

And Reyes is coming at a cheap price, but there's a reason for that — he's coming off a 52-game suspension for domestic violence, once again bringing up the question of how to handle athletes in Reyes' situation.

Domestic violence in sports has become a contentious issue in the past few years.

Several high-profile athletes have faced domestic violence charges and sports leagues have faced tough questions on how to discipline them.

"Saying I did nothing wrong is a stretch, but saying I am innocent is correct, yes sir," Greg Hardy told ESPN.

Hardy suited up for the Dallas Cowboys in 2015 despite facing allegations that he beat his girlfriend. At the time, photos of the beaten woman were leaked by Deadspin, but Hardy maintained his innocence.

A judge found Hardy guilty of assault, but he appealed and the charges were later dismissed. He was also suspended 10 games for his actions, but the suspension was reduced to four games on appeal. He's now a free agent.

U.S. national soccer team goalie Hope Solo is still facing charges that she beat her then-17-year-old nephew. Her half-sister says those allegations are true, but Solo paints a different picture.

"I was a victim of domestic violence at the hands of my 17-year-old nephew," Solo said to ABC.

Solo hasn't been suspended by U.S. Soccer and is expected to start for the team at the upcoming Rio Olympics.

Then there's Floyd Mayweather — at one point the richest athlete in the world — who's faced numerous allegations of domestic violence. He pleaded guilty and faced jail time for battery charges in 2011 but later denied anything happened.

"Well, everybody actually — everybody's entitled to their own opinion," Mayweather said to CNN. "When it's all said and done, only God can judge me."

The now-retired Mayweather never faced discipline from the Nevada Gaming Commission or other authorities that oversaw his fights.

Now, Reyes says he's sorry about the incident that led to his suspension, and he'll take part in counseling while he's with the Mets.

And the MLB overall is trying to be tougher on domestic violence than some of America's other sports leagues. Its new policy says a player can be suspended with or without facing charges from police.

But still, it can seem to some like an athlete's performance on the field, court or ring is the bottom line here — even if sports teams say otherwise.

"It's something the Mets, I think, have to do," ESPN's Tim Kurkjian said. "They need a jolt at the top of that lineup."