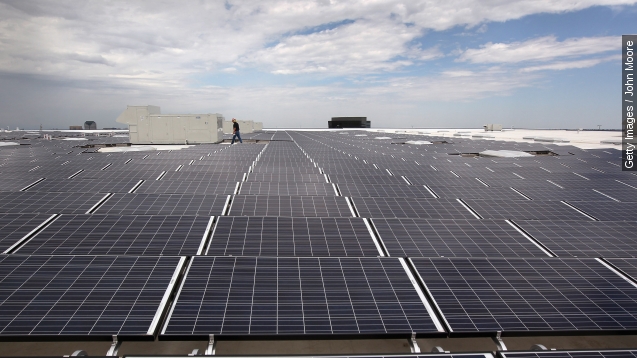 "Future generations will look back and wonder, 'What were we thinking? How could we possibly be so irresponsible?'" asked Democratic presidential candidate Hillary Rodham Clinton in a recent campaign video.

In what might be her most ambitious move of the 2016 campaign, Hillary Rodham Clinton pledged, if she were president, to take actions guaranteeing enough clean, renewable energy to power every home in the country within a decade.

More specifically, she set her goal at half a billion solar panels installed by the end of her first term.

In Iowa she responded to an anticipated argument from conservatives, saying, "I'm not a scientist either — I'm just a grandmother with two eyes and a brain. … I know that if we start addressing it, we're going to actually be creating jobs and new businesses."

While turning a controversial issue into an economic argument might be politically savvy, how does it fair statistically?

According to the Solar Energy Industries Association, the solar industry employed roughly 174,000 people in 2014. Together, they installed the energy equivalent of about 1.25 million homes. The average is 164 homes per megawatt of energy.

So if we keep the ratios the same, which is likely a high estimate because of economies of scale, installing 500 million panels would take a little over 702,000 workers per year for her term.

But the problem is the average solar panel only provides 200 watts of energy –– that's just 0.0002 megawatts (two ten thousandths of a megawatt). So Clinton's 500 million solar panels would power just over 16 million homes. To put that in perspective, that's around 14 percent of American households.

Then there's the argument that tax-payer dollars have been keeping the industry afloat. A 2015 Forbes article noted the federal government already spent an estimated $150 billion on renewable energy in the past six years, and current alternative electricity initiatives cost Americans $9 billion each year.

Again, her goal is to have every household powered by clean energy within 10 years. If the half billion panels per term rate didn't change though, it would take over 27 years to reach every U.S household.

Besides the cost for taxpayers, MIT notes the average solar panel is only 15-21 percent efficient in terms of how much sunlight it can make into usable energy –– an argument opponents could use to kill her program.

And arguments that pumping more money in the industry would make the technology more efficient might be unrealistic, seeing as even organizations advocating alternative energy show solar panel efficiency increased by only 5-11 percentage points over the past 50 years.

Depending on your position on climate change, Clinton's motivation might be admirable — but the economics of her plan might not be on her side.