What's The US Still Doing With All These Nukes? 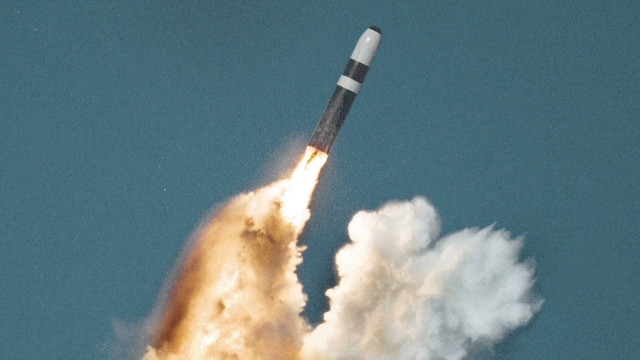 SMS
What's The US Still Doing With All These Nukes?
March 30, 2016
Newsy spoke with Adm. Cecil Haney, head of U.S. Strategic Command, about the administration's plans to maintain and modernize the nuclear arsenal.
SHOW TRANSCRIPT

"I state clearly and with conviction America's commitment to seek the peace and security of a world without nuclear weapons. I'm not naive. This goal will not be reached quickly," President Barack Obama said in Prague in 2009.

Seven years after that speech and some 70 years after the first atomic bomb was dropped, a world without nuclear weapons seems like wishful thinking.

Over the next three decades, the U.S. plans to spend as much as $1 trillion to refurbish or replace a new generation of air-, sea- and land-based nuclear weapons.

But the Cold War is over. Does the U.S. need such a huge stockpile?

We put that question to Adm. Cecil Haney, head of U.S. Strategic Command. He oversees the country's nuclear capabilities.

"As other nations have modernized and improved their capabilities, we have to maintain strategic stability as a first and foremost principle," Haney said after an event hosted by the Chicago Council on Global Affairs.

This, at a time when Russia's stirring things up in eastern Europe and China's rapidly upgrading its military and North Korea is being ... North Korea.

"We don't want the allies we provide assurance to, and what have you, to decide that they want to develop their own capability. That would be a bad state of affairs," Haney said.

To keep deterrence credible, the U.S. maintains an estimated 4,600 weapons — a number on par with Russia but far surpassing every other nuclear-capable country.

"I would look at the whole. And not just one slice of it in terms of this journey that I think we as Americans can be very proud of," Haney said.

It's true. Since its peak during the Cold War, the U.S. has significantly reduced its nuclear stockpile — just not enough, say critics.

The criticism is bipartisan. In a 2007 Wall Street Journal op-ed, two Republican secretaries of state, a Democratic head of the Senate Armed Services Committee and a Democratic defense secretary warned the U.S. was set to enter a nuclear era "more precarious, psychologically disorienting, and economically even more costly than was Cold War deterrence."

In 2012, Gen. James Cartwright, former head of the Strategic Command, called for reducing the U.S. arsenal to 450 deployed warheads.

An Air Force paper suggested shrinking the arsenal to 311.

And former Defense Secretary William Perry has called for getting rid of land-based intercontinental ballistic missiles.

But despite charges that the current nuclear inventory provides more than enough deterrence, there's been little public debate in Congress or on the campaign trail.

Reporter: "Would you oppose plans to spend a trillion dollars on an entire new generation of nuclear weapons systems that will enrich military contractors and set off a new global arms race?"

Clinton: "Yeah. I've heard about that. I'm going to look into that. Doesn't make sense to me."

"With nuclear, the power, the devastation is very important to me," Donald Trump said during in a CNN debate in December.

Or at least, for a trillion-dollar issue, not much debate of substance.

This video includes clips from the White House, The Chicago Council on Global Affairs, CCTV, the Kremlin, KCTV, The Intercept, Los Alamos National Laboratory and CNN.